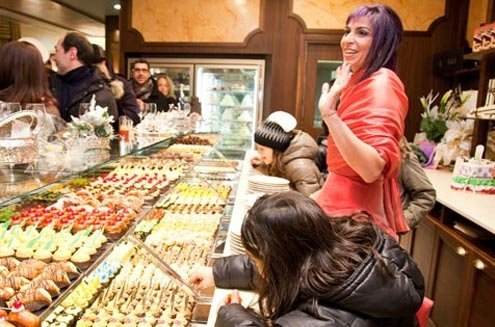 March 2013: Figures show the worst but most refuse not to show their best side.
F

rance, Spain, Greece and Italy are in recession. The Mediterranean flank of the Euro-zone is a cripple on paper. Daily news varies between the bad and the very bad. Tales of woe are a conversational fixture. Italy’s statistical institute, ISTAT, recently released a dire report to which Reuters added apocalyptic flavor: “Millions of Italians cannot afford to heat their homes properly or eat meat as their country is racked by recession and soaring unemployment.”

But postmodern recession has a different feel from its 19th and early 20th-century predecessors. Poverty is now a stigma, which means recession-damaged consumers work hard to cover their warts. In urban, middle class Europe, a century removed from its own favelas, evidence of crisis — itself an overused word — is pushed below a waterline whose level and appearance is fiercely defended.

In my affluent, northern Rome neighborhood, all bemoan the crisis, which they insist they can feel. The florist says she has fewer customers, the local restaurant owner ditto, and my ever-fibrillating third floor neighbor can’t stop looking grave. “We can’t go on this way,” he tells me.

So on a Friday I decided to take a walk to see the post-nuclear landscape for myself, and immediately found myself on packed streets. At the nearby open market, well-dressed and cosmetically repaired middle age women bartered for scarves and sweaters with local merchants while Senegalese vendors hounded them to buy umbrellas (which humans apparently lose by the millions). No one was not speaking on a phone or sending a text message. No one was dressed in rags. No storefront was deserted or hollowed out. One small clothing boutique had a “going out of business” sale, its go-go boots clerk at the front smoking and texting mirthfully.

My supermarket — there are two on one block — was also packed. Housewives poked around while their servants, mostly south Asians, picked items from the aisles. Organic food sections, relatively new in Italy, now offer up a multitude of small-farm pasta and juices. It’s nothing like American proliferation, but there’s no shortage of stock or overflowing shopping carts.

When I finally got to my barber, my original destination, he couldn’t take me because of the three handsome men ahead of me, two dressed to casual perfection, the third with shiny cufflinks. Next week, I said to him. He nodded, seeming anything but crisis-stricken.

At the pharmacy next door, I noticed that two young women assistants had joined my friend Gabriele who was once alone at the front desk, apparently to help him deal with the midday rush. He embraced me but was too busy to talk. Crates of new medications had just arrived and needed sorting. Customers foraged among hair-care products and balms.

At the tobacco shop, one of many in a five-block radius, men and women streamed in to purchase phone cards and cigarette packs, sometimes four packs at a time, handing over €50 bills in a way that didn’t seem shy.

The last leg of my walk took me past my local restaurant, where the lunch crowd had begun stirring. Outdoor tables were taken or booked (on beautiful days they’re snapped up by smokers). In the bar-cafeteria next door, crowds bent over the counter where all kinds of sandwiches, mozzarella their staple, had just been put on display. Bankers joined electronics store employees in loud banter. At the restaurant, waiters filed in and out, struggling to keep up with orders.

The traffic around the nearby piazza was intense, with cars weaving around trams, honking and maneuvering to avoid an ever denser layers of motorbikes, all this in a city where gasoline runs $8 a gallon.

Only the florist was empty, but she had nonetheless opened a small bookstore on the side, with hand-chosen titles. It’s a new venture that gives her pleasure. Her daughter, she told me, was now studying chemistry outside London. They worry about what kind of job, if any, she’ll find in Italy. The florist and her husband expect to visit her in August, when the store closes for its annual two-week break. After which they’ll go to Norway, where they’ve never been.

A century-and-half ago, when industrialized cities first began absorbing rural refugees, rich and poor were segregated by living standards, a strict and visible status quo Europe worked for centuries to undo. In the U.S., particularly in smaller centers, railroad tracks had their right and wrong sides, with a social and educational abyss in between. The “middle classing” of the West has changed that, delivering means to dodge the poor-look bullet.

Social cosmetics are now a vital part of new-age European Darwinism. The homeless and the starving, an urban reality in Europe until the humbling of World War II, are all but invisible this woe-go-round. Fact-of-life poverty among locals is unacceptable.

Back at my building, groceries in hand, I bumped into my third-floor Mr. Cassandra. He and his wife, he told me, had decided to visit Thailand. “Anything to get out of this unbearably sick country.”

Where despite the hyperbole life goes on.