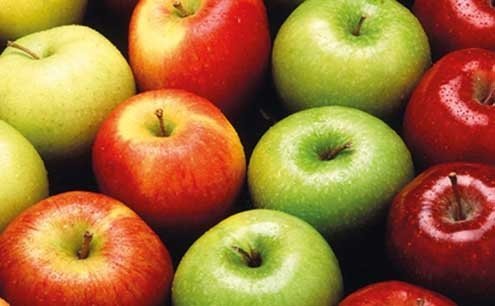 Apples are used in sauces and even to flank roasts.
E

ating seasonally is a primordial urge coded deeply inside basic human DNA. It’s like the ticking of an inner clock. But modern day globalization and mass distribution has largely erased seasons, tampering with human rhythms and instincts, not always for the better. No wonder I cringe when I see my dad in California dropping “organic strawberries” into his cereal in mid-January. It may taste good but it’s not natural.

Eating food that’s in season means feeding on fresher, more flavorful produce, though many don’t know it. How many times have I heard visitors to Italy lament leaving behind what they say are the best tomatoes they’ve ever eaten? But few associate the wonderful flavor with eating the vegetable at the peak of its season.

Eating seasonally is also more affordable. Buying food when it’s abundant is cheaper for both farmers and distributors, significantly knocking down prices at the market. It also supports local farmers and growers, which in turn helps local communities flourish.

In autumn, with the harvest over, it’s time turn to let fruits and vegetables do the work. Loaded with sustaining nutrients, they’re ideally suited to help nourish the body during colder months.

In Italy, fall fruits are abundant and used in all sorts of delicious ways. Here’s a sampling:

• Apples: At their best between September and November — crisp and juicy or more yielding, depending on the variety — apples are the stars of the fall fruit bowl. Italians not only use apples in cakes and pies but also apply them to poultry stuffing, to sweeten sauces, or as an aside with pork roasts. For upset stomachs, Italians bake apples, mele cotte, adding a bit of sugar and a few drops of lemon juice.

• Blackberries: From August to mid-October, blackberries are a juicy presence at local markets and a way to pack in some healthy Vitamin C. Usually eaten raw (straight from the hedge!) and staining fingers and lips with their dark, juicy humor, blackberries can be also cooked and made into sweet coulis and baked in pies. When buying blackberry baskets, ensure the underside isn’t stained – staining means the lower level of berries has been crushed and the berries blemished, often in the beginning stages of mold.

• Chestnuts: Fresh chestnuts are around from the end of September to the end of January. The comforting aroma of roasted caldarroste (open fire-roasted chestnuts) is a sure sign of autumn. The sweet, crumbly nut also provides Italians (Tuscans in particular) with chestnut flour.

More affordable than regular flour and packed with nutrients, chestnut flour is used in interesting desserts such as castagnaccio (a gluten-free flat brownie-like cake studded with raisins, pine nuts and rosemary needles) and necci, chestnut flour pancakes slathered with fresh sheep’s milk ricotta. Unlike many other nuts, chestnuts should not be eaten raw. They’re too acidy. In Italian folklore, raw chestnuts are associated with head lice, an unsettling bit of a medieval mischief.

• Dates: Dates are among the oldest cultivated fruits, thought to have been a staple of the Babylonian diet thousands of years ago. Sweet, with a rich, deep flavor and a lush, slightly chewy texture, the mahogany brown Medjool variety dates are the sweetest, with a taste that hints at toffee. At Christmas, Italians end holiday meals with dried fruits and nuts. Dates — either plain or pitted and stuffed with almonds, or smeared with salted butter — play an important part in the ritual. Dried dates are available year round, but you’ll find the freshest between October and January.

• Grapes: The earliest archeological evidence of the cultivation of the domesticated grape and winemaking dates back what is now Georgia, at the crossroads between Europe and Asia. Wine grapes and common table grapes are separate and very distinct fruits. In season from late September to November, table grape varieties are usually seedless, have relatively thin skin and come in different sizes. Wine grapes on the other hand are smaller, usually with seeds, packed in tighter clusters and protected by somewhat thicker skin – a desirable characteristic in wine making. Table grapes can be used in the kitchen to moisten and sweeten thick pot roasts, while dried raisins and sultanas distinguish Sicilian sweet and savory cuisine. Grapes are often used as natural pectin in jams and preserves. They also make an appearance on cheese boards.

• Pears: In season from September through January, pears have a characteristically sweet, delicate, almost granular flesh that bruises easily when ripe. It’s important to always buy slightly under ripe pears. But pears ripen from the inside out, so don’t assume they’re still too firm to eat after a few days. They can be cooked with wine and cloves and pair well with aged cheese.

• Persimmon: The many varieties of persimmon ripen from October through March. Originally from Asia, persimmon trees now dot the broad European countryside. The actual fruits – called loti or kaki in Italian – are quite firm until they ripen, at which point they burst into voluptuously soft orbs with a silky mouth feel and the weight and texture of a water balloon. Ripe persimmons are very delicate, that’s why they’re carefully packed in padded Styrofoam trays. Mostly eaten raw, they can also be used for jams or piquant mustards that pair wonderfully with cheese and cured meats.

• Prickly pears: In season from September through November, colorful prickly pears — locally called fichi d’india — grow on the flat green pads of the nopal, a Central American native cactus that populates many southern Italian regions. The sweet, succulent pulp is concealed under a thick thorn-studded skin. Best eaten raw, prickly pears can also be chopped and baked in pies and tarts along with rhubarb stalks and other seasonal fruits.