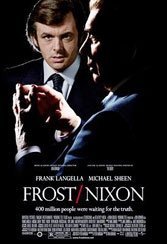 In 1977, treasure-hunting British talk show host David Frost audaciously obtained a series of TV interviews with disgraced former American President Richard Nixon who had left the White House three years before in the wake of the Watergate scandal. Though Nixon stepped down of his own volition, he was controversially pardoned by his successor, Gerald Ford.

Based on a Peter Morgan play, director Ron Howard’s fictional documentary recounts how Frost (Michael Sheen) doggedly pursued Nixon (Frank Langella) and ultimately went ahead with the interviews despite sponsor skepticism and disdain from America’s mainstream networks, which saw Frost a lightweight and imagined his effort as “big wet kiss” publicity stunt that would only favor Nixon. In fact, the overmatched Frost did a considerable amount of wet kissing, until coming alive on the subject of Watergate and pinning down Nixon in a way no one had before.

Moving stage plays to the screen often diminishes dramatic friction — in this case between Frost and Nixon — putting cinematic trimmings in its place. That certainly happens here. At the same time, Sheen’s indomitably cheery Frost and Langella’s dour, greedy, persecuted Nixon are so exceptionally handled that just about everything else in the film fades to black, as it should. Langella, who doesn’t look at all like Nixon, compensates with physical and emotional language so convincing it’s uncanny if not alarming. His early assertiveness turns into a personal recession.

“Frost is not in your intellectual league,” Nixon aide Jack Brennan (Kevin Bacon) tells the buoyant former president before the interviews begin. But television levels both intellect and leagues, making hay from scowls and letdowns, something that dogged Nixon throughout his political life. Morgan also wrote “The Queen,” which later saw the versatile Sheen shine as Tony Blair.