From words to anatomy, and back 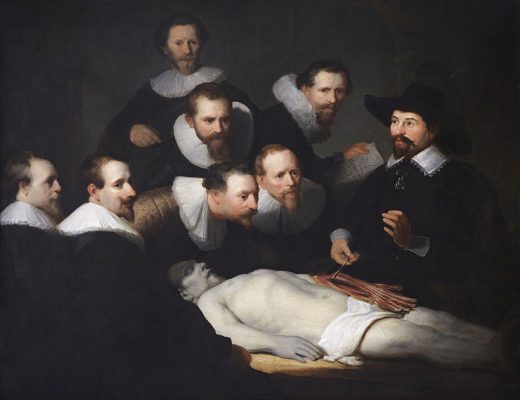 bout five years ago, I briefly considered embarking on a second career as a doctor. Though I’d been a health reporter for several years, this was different. I suddenly wanted to be on the other side. I loved the energy in an operating room, and got goosebumps when I covered “match day” at the University of Florida, when medical students find out where they’ll be going for their residencies.

I couldn’t help feel the students’ gush of pride as my own. Medicine has a way of marking you as a doer of good in the world. Who doesn’t want to have a doctor in the family? Writers are a somewhat different story.

Like most American kids, I had different thoughts at different times when it came to answering the “what do you want to be when you grow up?” question. Early on, I came up with businesswoman, interior designer, actress, judge. Later, I discovered journalism, where I could wander into many worlds without staying too long in any one of them. Plus, I could write.

In junior high, I wanted to be a brain surgeon. My friend’s dad was a neurologist, and she had a big poster of the brain in her bedroom, which intrigued me. I loved the dissection unit in biology, so much that I did extra credit dissections of baby pigs after school.

I wasn’t very good at science, though, or math: I struggled for As, sometimes getting Bs. Physics was an outright disaster. I wrote poems in the back of algebra class, and by senior year of high school, I was so smitten by newspapering —I was news editor and columnist of my school paper — that nothing else seemed to matter.

Fast forward a decade, when I was in a Master’s program in journalism and my mother was diagnosed with terminal cancer. Her illness was my “beat.” My mother had always encouraged me to write, but she didn’t appreciate the meddlesome nature of reporters. When I asked to interview her cancer “buddy” Ella, my mother took offense.

But what are you doing for us? she asked, leaving me alone to ponder that question. I felt at times that I was providing relief and empowering the women I interviewed, my mother included. She was at turns annoyed and delighted with me when I asked too many questions of the doctors or complained about the health care system.

Who doesn’t want to have a doctor in the family? Writers are a somewhat different story.

But I also felt like a lightweight. My mother came from a long line of caregivers: firefighters, paramedics, and nurses. She herself was a nurse who had helped plug gunshot wounds and held the hands of the dying. I might have lifted some spirits, but I wasn’t saving any lives.

When my mother was dying, the caregivers tended to her bedsores, while I took refuge in reportorial inquisitiveness. What did her cancer look like? I wondered. Were the tumors barnacled, like the surface of the moon? Did the cancer burn through her organs like acid?

I put my heart into health reporting after my mother died, and maybe only because she had died. I reported with empathy, respect and genuine curiosity about medicine in its many facets, and my efforts were duly recognized.

But I wanted more. A bigger challenge, and a different one. I tracked down a University of Florida anatomy professor I’d once interviewed. He taught introductory anatomy to first-year medical students. He was old school, and kept a copy of Rembrandt’s “The Anatomy Lesson of Dr. Nicolaes Tulp” at the front of the room.

He let me into his online anatomy course for students applying to medical school. At the end of each of his weekly lectures, he asked if there were any questions, then sent us off with, “have a good day of learning,” in a grandfatherly voice as reassuring as milk and cookies.

My own questions, which I never asked, told me that I was probably not cut out for medicine after all. Why are they called “caverns”? I wondered, when introduced to the organ systems. I was more absorbed in the Latin origin of medical terms and their metaphoric range than their functional meaning.

I dropped the course and shortly thereafter, I also quit my job as a health reporter, seeking to walk into a wider world of subjects. I continue to walk in and out of rooms I will never fully inhabit, always coming back to my own woodshop of words — aware that perhaps the only person that I am saving is myself.