From Signorina to Signora 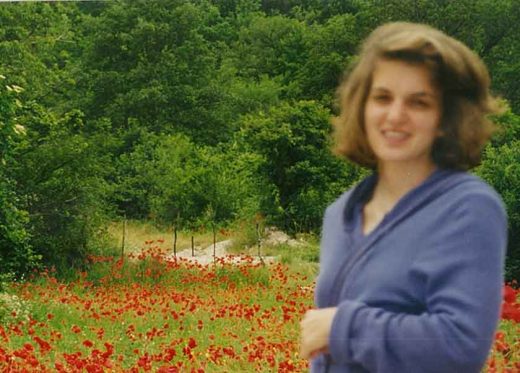 The author in her Italian "signorina" days.
A

few years ago, when I visited Rome for the first time since living there in my twenties, it was disheartening to be called signora. I had always been signorina.

Quanti ne vuoi, signorina? the vendors at the market would ask as I bought my fruit and vegetables. How many do you want? Signorina had a certain lilt that made me feel like I had all the time in the world.

Signora sucked the energy out of me. Ha bisogno di un aiuto, signora? the shopkeepers asked. Do you need help? Do I look like I need help? I wondered, suddenly paranoid about how old I looked.

Certainly, at the time, 40 was on the horizon, but I still passed for my early 30s. I wasn’t married. I didn’t have kids. I weighed the same as I did in my 20s. I thought I could still carry the aqua e sapone or natural look that Italians had called me. But maybe, I thought, it was time for makeup.

Just as I’d come of age in Italy, Italy was perhaps now preparing me to age.

I decided that my hair, pulled back in a French twist, was the culprit. So, I went to a salon and got it straightened. This made matters worse. I looked like one of those signoras who gets their hair done: it was coifed, not cute.

I left Italy resigned to the passaggio di tempo, the passage of time that had, however subtly, made its mark. And just as I’d come of age in Italy, Italy was perhaps now preparing me to age.

I thought of this last summer, when my partner, David, and I took our daughter, Julia, to my hometown in Iowa. “Well, it finally happened,” David said, coming out of the drugstore with diapers in hand. “I got called grandpa.” The clerk, seeing the baby supplies, asked David if he was spending time with the grandkids.

David was nonplussed. Despite having a youthful look, his salt and pepper (slightly saltier) hair ages him. Plus, he’s 10 years older than me, and at 42, I am already considered an old new mother.

Sure enough, my time came. When I took Julia to a reading at the Iowa Writers’ Festival, a woman came up to us, gushing, “What a cute grandbaby!”

“Oh, thank you, she’s actually my daughter,” I said, bemusedly. The woman, who was in her sixties, apologized profusely and explained that most people in her festival writing class were her age, so she just assumed everyone was. Just another writer lost in her own head, I thought, as if looking in the mirror.

Then David and I got branded together. Heading back to Florida, the stewardess said, “Grandparents got the baby for the weekend?”

We both smiled, wanly. “It was me,” David told me. Maybe, I thought, looking out the window. But, we were in the heart of rural America, the town where John Deere tractors are made. Rural Americans tend to have babies early. My step-mother, from small-town Iowa, is younger than my father, but has several great-grandchildren.

Still, living in a college town, I’m reminded that I’m no longer college-aged. College students speak a different language. “Any dirty diapers?” I once asked Julia’s baby-sitter. “No, but she had a shart,” the sitter said. “A what?” I said, getting it as soon as I asked.

Once you’re a mother, you’re a “signora” for life.

My Italian students didn’t read cursive, and one of their favorite words was videogiochi, which unlike the videogames of my youth, they play on their iPhones, and with each other from afar.

September 11th was a particularly sobering moment. After class, I noticed the main university square flooded with mini American flags. I instantly remembered where I’d been: visiting my parents in Iowa, home from my life in Italy. My Italian boyfriend had called, and we watched the footage together. It felt like the whole world had stopped, and briefly stood together.

My students were just toddlers then. They likely have no memory of a moment that my generation will always remember, like the assassination of JFK for my parents’ generation. For my students, 9/11 came and went, without recall. The next day, as if echoing my thoughts, the flags had been removed.

All this is to say: I don’t actually mind getting older. I’ve always been part old soul (and part, child at heart). Being older suits me. It’s arguably better vantage point for writing poems, and I like the more sophisticated aesthetic of say, Eileen Fisher clothes (although I still manage to pull an occasional Boho look).

I thought having a baby would make me feel younger, but initially, it reminded me of my own mortality. I now have a living legacy. Certainly, Julia’s birth also marked my own rebirth. And, watching her construct her world—one sound, one syllable, one word at a time—is a beautiful thing. Imagine, her first word was ama. To love. She was searching for mama, but love came out first.

Sometimes I have to remind myself to be present, knowing that she’ll soon have it all figured out. I remember reading Shakespeare’s “The Seven Ages of Man” in junior high. I loved it for being so neatly prophetic. All stages are indeed a once, just like life itself.