From Hue to the Eternal City 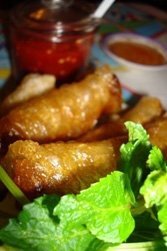 Cha gioa, or involtini to you.
R

ome’s unsung Thien Kim has never fussed over itself. Founded by a Vietnamese family that fled embattled Hue four decades ago, it’s still an understated family affair. Considering the restaurant’s location, across the river from busy Piazza Trilussa and three blocks from wild-at-heart Campo de’ Fiori, and also considering the proliferation of students and night prowlers in the area, you’d think Thien Kim would be awash in customers and the subject of deserved raves. It certainly has a loyal clientele, with embassy, diplomatic, and Vatican devotees keeping its two rooms filled on Friday and Saturday nights (it’s closed on Sunday). But otherwise it’s still something of a well-kept secret.

Subjectively speaking, Thien Kim is the best ethnic restaurant in Rome. For those who say, “So what, Rome ethnic is awful,” consider that its standards would fit in well in New York or L.A. The upside is delicate Vietnamese cuisine (10 appetizers, including exquisite “involtini,” or cha’ gió spring rolls, delectable dumplings — known as ravioli — and delicious vegetarian rolls); the downside, at least for those who revel in people watching, is its “locked in” location at the mouth of Via Giulia. There’s no outdoor dining, though the inside rooms are pleasantly air-conditioned.

What makes Thien Kim special, ironically, may be its overall lack of “specialness” — which means it emphasizing doing the little things right over hyping what it does. There’s no gourmet pretension and certainly no invasive owner barking order. Wonder of wonder, it’s intimate and quiet, rare in Rome. The chicken with lemongrass (citronella) or satay is what it says (though don’t expect U.S.-style peanut-laced sauce; it’s lighter); the grilled meats are tender; the over-emphasis on garlic, which strikes dead a lot of Rome’s ethnic spots, is not an issue here. Phò soup, with noodles, meat, and vegetables, is unusually flavorful. Grilled and breaded shrimp is excellent but you’ll need to tell them if you want it hotter, since Italians tend to shy away from spices. Portions are accessible, which means that a dish of assorted appetizers (€6) is hardly the size of half a similar portion in the United States.

A word of warning about duck: It’s not a Rome staple, which means the available fare is often too heavy and gristle-laden. That’s not so much the restaurant’s fault as a culinary shortcoming of the city (unless you opt for luxury joints).

For a family of four, five appetizer portions and five main dishes should do the trick. Remember, take-out is possible but dubious. Take-out culture has yet to take hold in most restaurants, meaning cooks expect you to eat what’s on your plate. Don’t over-order and then expect them to hand it back at you at night’s end. Not going to happen.

Wine list is nothing more than adequate, but decent Falanghina at €11 a bottle goes well with a summer meal. Also, eat early and don’t expect to linger much past 11 p.m. They like to close about then. Expect to pay €30 a head. Book ahead. Menu contains English translations. French spoken.

Oh, and Elizabeth Rosenthal of The New York Times recently wrote about Via Giulia but focused much of her attention down the street, omitting the “beginning,” which is closer to Piazza Navona than the the Corso. That’s where you’ll find hole-in-the-wall Thien Kim.