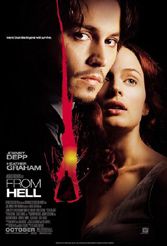 Mood? Albert and Allen Hughes (“Dead Presidents”) slather it on celluloid patties — never mind that 19th-century London is really modern Prague. Murkiness is everywhere. But their take on Jack the Ripper is ultimately addicted to all that fog. Johnny Depp is London police Inspector Frederick Abberline, a neurotic opium addict who when sober has a sixth sense for detective work. His talents and a growing closeness to Whitechapel prostitute Mary Kelly (a painfully wooden Heather Graham) suggest he might hone in on the mysterious predator. But pathologist Sir William Gull (Ian Holm), the Queen’s Surgeon, mocks and impedes Abberline, dismissing his insight. The texture is exceptional and Depp in full flight. Overall, though, it’s dud — which happens without fail when ambiance is more compelling than plot.