From Beirut to Jerusalem 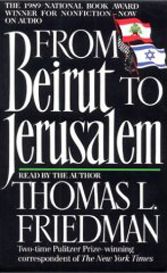 Today a New York Times columnist, Thomas Friedman was posted in Beirut in 1979, covering the Lebanese civil war first for UPI and later for the Times. He then moved to Jerusalem, and his insights on both Lebanese and Israeli society are especially relevant today. Writing about the 1982 invasion, Friedman notes: “Each Israeli soldier entering Lebanon was given a red-and-white pamphlet entitled LEBANON, published by the Israeli army education corps. The entire 14-page pamphlet, a condensed history of Lebanon, contained only two passing references to the Shiites, Lebanon’s largest single religious community in the 1980s.”

Friedman has repeatedly updated the original 1990 volume, adding chapters and notes based on current events.

About the Author: Greg Burke

Greg Burke is the Rome correspondent for Fox News. He previously covered Italy for Time Magazine. With Christopher P. Winner, he helped found the biweekly Rome-based magazine Metropolitan in 1992. He considers himself somewhat of an expert on Italian football, and is the author of "Parma: Notes from a Year in Serie A." He studied comparative literature at Columbia University, but his goal in life is to become the head coach at Napoli.