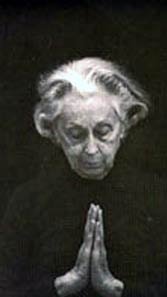 he yoga teacher is angry. She’s a Scorpio after all. Loyal, secretive, protective, jealous — or so say astrologers. I knew nothing of signs, let alone Scorpios, until she summed it up harshly: “Psycho.”

Yet she was anything but. We corresponded often. She planned an R&R trip to Rome. Meantime, she sent me a book by an Italian yogi with a Scrabble-worthy name, Wanda Scaravelli. It contained photo of a tiny woman in impossible poses. Rest your spine, the woman said. Peace is acquired. Do not compete. Breathe deeply. “The efficiency of an attentive mind is incalculable.” Scaravelli died in 1999.

I hoped my brain might seek peace, but no luck. My brain is a loner.

Instead I helped the yoga teacher find a postage-stamp apartment for her month-long stay. The task gave me missionary zeal. I met a prospective landlady who fiddled with a wine glass on a stair-step terrace and wished she were in her beloved California, an Italian way to impress an American. “Certo,” she said. “Prego.” “Che bello.” Her friends lunched in a sunny corner of autumn and talked about bridge.

As a boy my mother left my father. It happened fast. “I’ve taken care of him for 11 years and that’s enough,” she told my father. I listened secretly on the upstairs phone. She never returned. Today I might be known as a victim of dysfunction. Then I was told get used to self-reliance.

I told the story to the yoga teacher. “Oh, C,” she sighed. She came from a loud family that was always on the move. She was also a mother. Her empathy came without strings.

We were apples and oranges, but crated alike.

The yoga teacher traveled often for work, which left us to chat across time zones. Her dawns flirted with my evenings.

Person email is vanity’s accomplice. Daydreams are spilled to strangers. The life of the mind indulges itself. Long before digital effects, the boy in me ordered picture-book dinosaurs to come alive in my basement. So it was that dozens of dinosaurs were at my beck and call. They also slept on my command. I was the emperor of dinosaurs. Reality is more stubborn than passive reptiles, which if nothing else should chasten the video game generation.

The yoga teacher and I lived very different days. I spoke from my quiet Rome; she responded amid children, a garden, a dog and, nearby, the unsettled ocean. As a Christmas gift, her son wanted a gun to make his brother shut up. I instead reveled in the sound of nearby zoo lions hoping they’d say more.

My father masqueraded as a fatalist. I knew better. “Always look ahead,” he said. “If you see it on the horizon it’s already too late.” After my mother left, he took me on European trips to console me, though his real consolation was my company. I would blossom when he died, he told me. Hush, I answered.

But I did blossom late. After his death, I piled up six courses in a semester to make up for ones I’d missed while nursing him. “Absolutely unrealistic,” said my advisor. I graduated with honors.

At the airport, the yoga teacher smiled. She looked like ice cream.

Pop fiction and TV sell love in primary colors. Men want “a,” women want “b” — the rest is a whirl. But it’s not that way.

We were off-key, the yoga teacher and I. She wanted to leave family hubbub behind and let a foreign city be, well, foreign. She’d pledge to nothing while bending. Bend correctly, says yoga, and you don’t break. You grow.

She stretched and I begged. “Let us be less impatient,” implored the tiny Scaravelli. But I was more.

Two years before his death I interviewed the Italian Nobel Prize-winning poet Eugenio Montale in Milan. His voice sounded like the gravel a shovel uses to make itself heard. Wasn’t it remarkable, he said, that he’d never know how the future turned out. “Everything’s in a big cauldron,” he croaked. “Who knows what’s in it. It could be some amazing potion. Or maybe some monstrous frog!”

Potion or frog and I picked frog. Me, impatient frog in a china shop.

“You know your problem,” my oldest Italian friend told me recently. “For years you trusted your instincts no matter what. You took chances no one would take. Now, you stop to think.”

Stop long enough and even astrologers lose their way. The zodiac pockets its best potion and leaves.