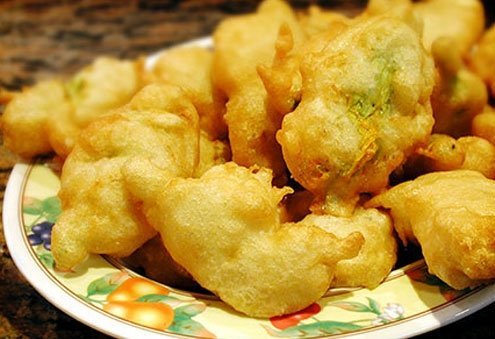 irst a disclaimer: Fried foods are delicious but rarely good for you. There’s no way around it. But understanding what makes them unhealthy can help you steer away from overly indulging their harmful side.

Let’s take a generic look at what happens during frying. We can then delve into the details.

Using zucchini, it goes like this. You take a slightly damp stick of zucchini, dip it in batter and drop it in oil. When the zucchini enters the oil, the batter forms a protective crust. This allows the water inside the zucchini to steam the vegetable from the inside while the oil cooks the batter. Ideally it should cook quickly so that you get a crispy outer crust and a tender, moist interior.

If left to cook too long the oil begins to penetrate into the vegetable, making it soggy and overly oily, adding to its fat content.

The perfect fry is quick. You want to get a golden outer crust without letting in excessive oil.

Let’s now look at the elements more closely, starting with oil, by far the most important.

Many oils are available for frying. Each has pluses and minuses. Frying absorbs saturated fat, the unhealthiest kind (linked by medical research to cardiovascular disease). But it’s saturated fat that helps oil maintain its structure at high temperatures.

All oils have different smoke points, the temperature at which they literally begin to burn. Oils with increased saturated fats tend to have higher smoke points, which makes them better to cook with. In short, the worse an oil is for your health, the better it is to fry with.

The optimal frying temperature is between 170° C and 190° C (340-375° F). As oils near their smoke points, they begin to denature. Kept at high temperatures, their structure comes undone.

For context, here are some common oils (and butter for good measure) and their smoke points.

Smoke point-wise, butter would seem to come out on top. It can be held at high temperatures for a long time without denaturing. But its saturated fat content is 65 percent.

Olive oil and grape seed oil have even lower saturated fat contents (14 percent and 12 percent, respectively), but their lower smoke points make them more prone to denaturing. While grape seed oil can look ideal, its cost can be prohibitive.

Most restaurants pick peanut oil. It has sufficient saturated fat to maintain the oil’s integrity for long stretches while it’s the lesser of “evils” in health terms.

Now let’s look at the batter.

Though some argue that plain semolina flour is best for frying, you’re free to play around. Beer batter is very popular in the United States. Tempura flour is great for calamari. Pastella, an active yeast-based batter, is used throughout Italy. From north (cotellata alla Milanese) to south (arancini), breadcrumbs are also popular. Some foods are just fried plain, take Jewish artichokes.

Frying with flour alone doesn’t give you the light, crispy outer crust that batter brings. But it depends on the food. For small calamari rings, flour adds a complimentary touch of crispiness.

Breading gives you a crisp but somewhat heavy outer crust.

My own favorite batter is beer yeast rich pastella. Pastella should be prepared at least an hour or so before you cook to give yeast a chance to rise. This yields a lighter and flakier result.

My standard recipe is great with simple vegetables and even better with fiori di zucca (zucchini flowers stuffed with mozzarella and anchovies).