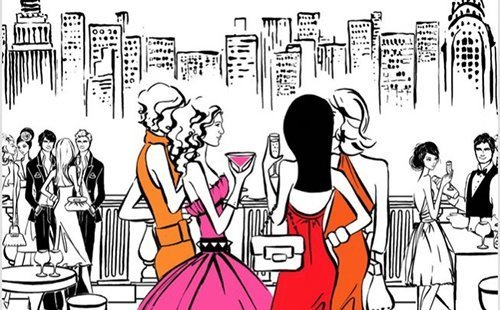 Thank you Carrie Bradshaw (or rather, Candace Bushnell),.
W

hat’s on my mind, you ask? Why thank you, Facebook, for taking the time to ask. How very kind of you. And what a great trigger you provide for my column.

What’s on my mind indeed. Here I sit, glass of Soave by my side, a winter vegetable soup heating up on the stove, computer lit up like an airplane control panel, and I’m thinking about a recent spat with a girlfriend.

I’m stuck in a “Sex and the City” episode and I can’t find my way out. Carrie Bradshaw, welcome to the Twilight Zone.

I love my girlfriends. Always have. I have girlfriends all over the world. I grew up with some of them, some I went to school with for a few years, most I don’t see often enough. We treat each other with gentleness and respect. We’re not demanding of each other. We take each other’s relationship choices and embrace them: from mainstream marriage with children to gay marriage with children to no marriage at all. We care for each other’s mental, spiritual, physical, and professional health. We do not nitpick. We just need to know that the other is well. Confession: I have been in love with several of my girlfriends. But that’s a different story.

For the past nine months now, I have been in love with a man, a wonderful, multi-faceted, complex, outgoing, introspective, and talented man. Despite all those grand words of praise, it’s not always been easy, and not just because I bring a warehouse full of baggage with me. He’s far from perfect. Nonetheless, I think we’re on the right track toward creating an honest, sincere, committed and fun relationship. It helps that we’re both as mad as March hares.

Now, on to the crux of the matter. A mutual friend introduced us — a woman who had, in the past, also slept with him. This didn’t constitute a problem for me as she wasn’t seeing him when we were introduced. But it may have been for her, at least at some level.

The other night he and I invited her over for dinner. All was going fine — though I noticed she was a little less exuberant than usual — until we sat down for dinner. One of the first things she said was how much I’d changed since starting going out with him. That was just the start. I had also become a mogliettina, a good little wife. I praised him too much. I had made him my focus.

I replied confidently, if a little defensively (wouldn’t you?) that she’d never known me in a long-term relationship. It was wrong of her to judge. After all, if a relationship with another person doesn’t change you, what on earth will? I also told her that if she didn’t like “this” me, she could take a hike. The dinner and evening went on in a pleasant enough manner.

I mention the conversation because it brought up a series of questions I’ve been mulling over.

Feel free to chip in.

When a friend tells you you’ve changed is she telling you indirectly that she doesn’t like you any more? Do women change more than men when they enter a new relationship? Why do some women get testy when one of their girlfriends is in a relationship? Is this a cultural difference — my friend is Italian — that I’ve yet to encounter? Is my friend simply jealous? Or is she trying to manage me? Or, going the extra mile, might she and he have spoken about how to get me to return to the rock n’ roll person I was when we met?

How exactly have I changed? Am I no longer being true to myself? Am I evolving or taking a detour? (Aren’t detours part of evolving?) If a person does indeed change when in a relationship, can the curve actually be mapped out? And most importantly, if my partner has noticed changes in me since we started going out, is that a bad thing? For sure, it takes time to get to know someone fully.

Maybe I’ll go back to being the carefree person I was when I met him — hardcore single, freelance professional, self-reliant. But if that happens I’ll no longer be in a relationship or it will be as if I am not. Or am I missing something?

Carrie Bradshaw (or rather, Candace Bushnell), thank you for making it easier to articulate questions about the evolution of our selves through sex and relationships. I look forward to knocking back a Cosmopolitan when the replies come in.