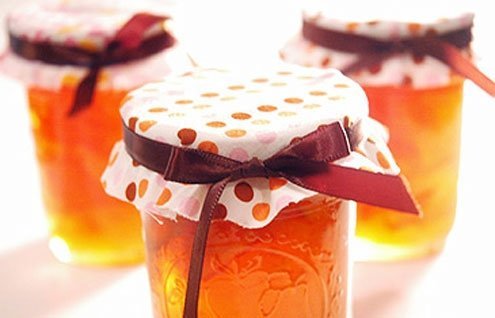 Being "the American" can help you spot... marmalade.
I

admire how Americans can strike up conversations with total strangers. “Hey, what’cha drinking? I’ll have one and another one for my friend here.” Americans are a generally outgoing, take-charge people.

Canadians are much more reserved. As with many gay kids, the brutal high school game of inclusion and exclusion did nothing for my self-esteem. I was shy by nature and became defensive and somewhat introverted. But now I was an openly gay adult. I talked to myself like a self-help motivational speaker: “You are the architect of your own destiny.”

Too many nights standing alone with a warm beer at Woody’s, Toronto’s best known gay pub, made it clear that I had to learn how to be more outgoing with strangers.

Shortly after moving to Italy, I realized that the Milanese had a Canadian streak. They don’t usually make conversation with strangers. I had hand-me-down friends from my partner Alberto, but was determined to make my own. So I resolved to use the social skills I had learned at Woody’s and create my own version of “friendly American Guy.”

It was August and I had just climbed out of the swimming pool after finished my laps. An elderly man had been watching me. “You’re a really good swimmer,” he said. “Thanks,” I said, sucking in my belly and puffing out my chest as I took off my swim goggles.

My chest fell and my belly pooped out. Okay, maybe he was a little too honest, but his general strategy seemed good.

I resolved to talk to anyone I could corner. I struck up a conversation with the woman in the next lane, Chiara, aka “the tornado.” She told me I was the first person who had ever talked to her — she’d been going to the pool for a decade. I then shared my thoughts and theories on swimming techniques with Vinny, aka “the body. He thanked me when I discreetly informed him that his left testicle had escaped from his Speedo. I challenged, Gigo, aka “the hulk” to a race, 200-meter free/back/breast/fly. He destroyed me. Overall, my plan seemed to be working. I had become “friendly American guy” at the swimming pool.

I had just started working at ENI, the Italian energy firm, a large impersonal company outside Milan. Teaching at a company can be a lonely experience. The teachers are outsiders with different schedules scattered around a large complex. I rarely found a fellow teacher to join me for coffee or lunch. Nevertheless, I resolved to introduce “friendly American guy” to the workplace.

After wandering through halls amid countless, nameless faces dressed in nondescript suits and ties (my old sweater and over-stuffed knap sac not helping with my out-of-place feeling), I finally found the office I was looking for.

I knocked and entered a large open space where some 20 people sat staring at computer screens. A young woman asked who I wanted. “Hello, I’m looking for Mister Coglioni, please.”

The whole office stopped and looked at me. A couple of guys laughed. The woman tried not to giggle as she corrected, “Mr. Collini.”

The word coglioni means balls in Italian and when used for a person it means he is an idiot. Behind her a young man timidly raised his hand and said, “I think I’m Mr. Coglioni.”

Soon, I had claimed the nearby Bar Minerva as my unofficial office. After an early morning class, I wandered over for a coffee and a cigarette. For once, the bar wasn’t jammed with office workers trying to push their way to the front. I waved to the Luca, the barman. “I want a refund,” I joked. “That cappuccino you sold me this morning didn’t work.”

Luca laughed while he scalded the milk. “Try this one.” He clunked the cup and saucer on the bar in front of me. I poked the last piece of brioche into my mouth and licked the marmalade off my finger.

A young guy in a standard gray suit and tie rested on his elbow at the other end of the bar, coffee in one hand, brioche in the other. He looked like someone headed for a job interview.

I looked up and my eyes caught his. He was probably wondering if I was British or American. I smiled and nodded slightly. He nodded back. That’s when I noticed an enormous glob of marmalade stuck to his upper lip. I looked away, certain that he’d realize it and wipe it off.

I turned towards the bar and placed my cup on the saucer, inconspicuously glancing back to the young man and his marmalade lip. It was still there. I couldn’t just let the poor guy go to a job interview without telling him. I looked directly at him and gently tapped my lip. He looked confused. How could anyone be so oblivious? I pointed again slowly. He looked aghast. Finally, I said, “You have marmalade on your lip. Now he looked furious. “It’s hhherrrpes,” he said wretchedly.

I clasped my forehead and stutter an apology. The young man clunked his coffee cup down onto the bar and stomped off. I looked at Luca who was struggling to restrain his laughter while he scalded some more milk.

People’s initial reactions to “friendly American guy” were mixed. But I’m pleased to report that after 10 years of mispronouncing, accidentally insulting and making a fool of myself, I’ve largely been forgiven. I have been able to practice my Italian and made a few friends along the way. Vinny, “the body,” Chiara, “the tornado” and Gigo, “the hulk” are now swimming buddies. Even though Mr. Coglioni moved back to Calabria, we’re still in touch. As for the Marmalade Man, I hope he got the job.