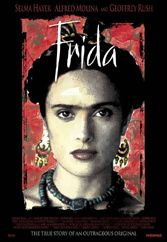 The early-20th century relationship between Marxist painter Diego Rivera and artist/diarist Frida Kalhlo is among those affair-proof romances that inspires admiration outside the strictures of loyalty. Voluble Mexican geniuses are apparently excused from conventional morality; they endure damage and make pretty pictures. Salma Hayek, in a role she coveted, is a (far too beautiful) Frida, a woman who’s body is damaged in a bus accident but refuses to quit, either on herself or on Rivera (Alfredo Molina).

Director Julie Taymor (“Titus”) selectively chronicles their stormy marriage, throwing in Rivera’s run-in with Nelso Rockefeller and his friendship Leon Trotsky. From the start, she parks the Veracruz-born Hayek in award-winning cruise control and leaves her there. Hayek’s Frida is sincere, excitable, reflective, but a repetitive, heavy-handed script weakens her range. Molina, with less screen time, does better as the brilliant fat bumbler with a weak spot for refreshing his bed. Whenever a director consciously sets out to make a “great” movie you can feel its adolescent side whispering, “Not on my time.”