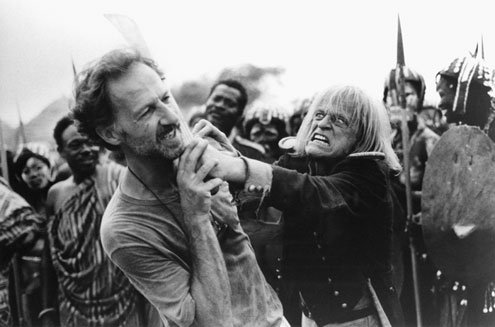 Herzog and Kinski: Mortal friends.
I

’m already fretting about the day Werner Herzog dies. At 68, the obsessive German director (best known for 2005’s “Grizzly Man”) brandishes no sign of surrender, averaging two or more new releases a year. But death is arbitrary, random. Losing auteurs Ingmar Bergman and Michelangelo Antonioni on the same day in 2007 was a shocking — if meaningless — coincidence. It’s also the event that set off my fears about Herzog. He’s the last of cinema’s heretics. When Herzog dies, so will iconoclastic film.

To the uninitiated, Herzog comes across as a total weirdo. I prefer to call him a charlatan, or dreamer. He’s that errant soul who, after being shot by a random sniper during a 2005 BBC interview, smiles. “It doesn’t surprise me to be shot at,” Herzog laughed moments later, dismissing the gaping red wound in his abdomen as, “insignificant.” The sniper got away. Herzog, who sees the whimsy in unsettling events, found no reason to chase the man down.

His idiosyncrasies run naked and carefree. Years before the sniper incident, Herzog made an unusual bet with friend and fellow filmmaker Errol Morris. If Morris finished the pet cemetery documentary he’d been idling at, Herzog would eat his shoe. Morris completed filming of “Gates of Heaven” in 1978. Herzog made good on his word. The boot-munching soiree was held before a live audience at the “Gates of Heaven” premiere, and became Les Blank’s 1980 short film, “Werner Herzog Eats His Shoe.” The opening titles roll out with a classic Herzog non sequitur: staring into the camera, he avows that we must, “declare holy war on what we see every day on television … there must be real war against commercials, real war against talk shows, real war against Bonanza.”

This anti-TV screed has little (alright, nothing) to do with eating shoes. But it does put the shoe eater in his own inscrutable context. “To eat a shoe is a foolish symbol,” Herzog remarked at the film’s conclusion. “But I think once in a while we should be foolish enough to do things like that.”

I can’t disagree. Without foolishness, there would be no Herzog. Nor would there be 1982’s “Fitzcarraldo,” the capstone of Herzog’s lunacy. Apropos for a film also about a lunatic (its protagonist Fitzcarraldo, played by wild-eyed Klaus Kinski, thinks enslaving indigenous peoples to push a steamboat up hill, only to then build an opera house, is a good idea). Thanks to sundry complications, “Fitzcarraldo” took three miserable years of jungle squatting to make. One snafu was a lack of special effects. Herzog, like Fitzcarraldo, had no choice but to MacGyver the steamboat uphill himself. The ordeal lasted months.

“Fitzcarraldo”‘s contribution to the film canon is unprecedented. It’s sweeping and lethal in scope — one of the few films whose making-of became the stuff of legends. “Burden of Dreams,” a behind-the-scenes documentary, was released to critical acclaim the same year. Les Blank once again directed, capturing Herzog’s creative intransigence just as Herzog captured Fitzcarraldo’s. And in 2009, the journals Herzog kept during filming, “Conquest of the Useless,” were finally published in English. I can’t think of a single person who wouldn’t want to read them, with such tender sentences:

“A vision has seized hold of me, like the demented fury of a hound that has sunk its teeth into the leg of a deer carcass and is shaking and tugging at the downed game so frantically that the hunter gives up trying to calm him.”

Dramatics aside, “Conquest of the Useless” is literary blitzkrieg. Even non-filmgoers would be troubled to put it down. Herzog’s observations are enigmatic, curmudgeonly, humane. “Why do these animal dramas preoccupy me so?” he writes after witnessing a wild rabbit tear apart a baby chick. “Because I do not want to look inside myself.”

I laughed whenever he brought up bad reputation Kinski. Kinski was fond of one thing only: attention. He’d fake illness and disease just to get it. In the midst of one of Kinski’s hourly shrieking fits on set, Herzog grabbed the last of his personal chocolate bar stash (good food was scarce in the Amazon) and gobbled it right in Kinski’s face. For once, Kinski shut up.

Herzog would have it no other way with his actors. He prefers nutters. Kinski was his eternal go-to — his “best fiend” — but Bruno S. was his darling. Herzog calls the inexperienced Bruno (a soulful, derelict street musician who passed away in August) the greatest actor he’s ever worked with. They made only two films together. 1974’s “The Enigma of Kaspar Hauser,” in which Bruno portrayed a nominal “wolf boy,” and 1977’s “Stroszek.” Herzog wrote the latter for Bruno as a gift. Bruno plays an alcoholic yet benevolent German street singer, Bruno Stroszek, who takes in prostitute Eva (Eva Mattes) from her brutal pimps. Big dreams in tow, they escape to rural Wisconsin. The sadness of this film is unmerciful. If you’re not convinced, here’s some trivia: Ian Curtis, lead singer of post punk band Joy Division, hung himself after watching it.

Curtis might not have been so quick to act if he’d watched the documentary Herzog made that same year. For “La Soufriere,” Herzog traveled to the evacuated Caribbean island of Basse-Terre where the volcano La Soufriere was expected to erupt any moment. He had two goals. The first was to get the last shots of the island before it was gone forever. (Spoiler: it never erupted. Herzog was embarrassed.) The second was to find the man who chose to stay behind. Anxious to know this man’s perspective on death, Herzog combed the island until he found him. He was sleeping beneath a tree. When asked why he remained, the man replied, “Like life, death is forever. I haven’t the slightest fear.”

I suspect Herzog feels the same way. If he’s not worried about his death, maybe it’s time I stop worrying about it, too.