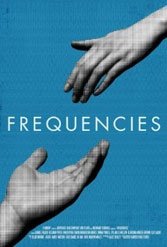 In a time that might be the present but is magically not, a boy and a girl like each other in school. But it’s not just any school. Boy and girl are geniuses, the girl called Marie Curie Fontaine, the boy Isaac-Newton Midgely (followed through flashbacks in different stages of life). In their rigorously rationalist world, knowledge determines destiny and human frequency separates Brahmins from Untouchables. Marie Curie’s frequencies vibrate more highly than poor Zak’s, leaving Zak’s attraction unrequited. Into this comes Theo Adorno Strauss, who, true to his musicological namesake, has different ideas about what makes human frequency matter.

Writer-director Darren Paul Fisher uses this early school panorama to catapult his story forward into an Enchanted Forest tale of love, fate and free will — shooting arrows into the Orwell-Huxley society he’s invented to subvert. Zak, perceived as “out of synch with the natural world,” uses Theo’s timbres to get closer to Marie, but is it love or manipulation? And who, really, is pulling human strings, if in fact we’re human and not elaborately tuned pieces of machinery? In Fisher’s cleverly deterministic landscape, opposites repel; love is prearranged; humor nonexistent; the joy of spontaneity disdained.

Fisher’s working title was “OXV: The Manual,” which may have frightened distributers into thinking they were dealing with a tract. But there is an OXV and there is a manual, as well as a key a to life, and love, with Theo ultimately straddling the lives of his classmates like a Cheshire Cat colossus, the meaning of meaning apparently in his tuned hands. “Although I do have the score,” he smiles, “there is joy in watching the performances.” Fisher’s film, though uneven, is delightful, enigmatic, profound and capricious, a provocative combination as rare and affecting as a Mozart composition.