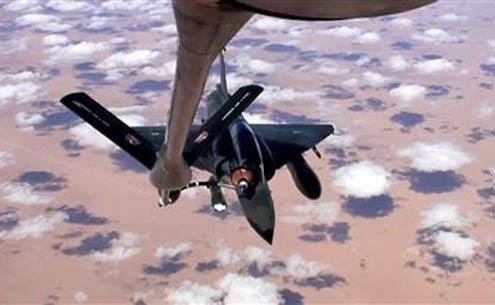 For now, France has limited its attacks to air strikes.
T

he macabre puppet theater called Mali has three characters, at least for now: little man, bigger man, biggest man. The former started the current imbroglio, the second kidnapped the plot, and the latter has now intervened to make things right, which is no more possible in practical terms than “repairing” Afghanistan.

But let’s backtrack, albeit simplistically. Mali is a vast L-shaped country and former French possession in west central Africa. After its 1960 independence, it hosted a succession of autocratic regimes. The bad days seemed to lift in the 1990s, even for the Tuareg nomads who have long laid claim to the country’s north. Not for long, however. In 2011, as Libya crumbled, Tuareg dropouts from the crumbling military regime of Col. Moammar Qaddafi hastened “home” and formed an armed insurgency, demanding independence for Azawad, the ethnic homeland name given to north Mali.

Here, the Tuareg guerillas made their first wrong turn, forging an opportunistic alliance with Islamic Ansar Dine and a second, more strident Islamic group, MUJAO. In loose alliance, the three toppled the standing Mali government and took control of the sprawling north.

Excellent news for the long-suffering, secular-leaning Tuareg, until they discovered their militia bedfellows had eyes on becoming their masters and overlords. The triumphant Islamists swiftly insisted on sharia law, an anathema to the Tuaregs, who had sought independence to improve their lot, not invite religions restrictions.

Things peaked in June 2012, when the Tuareg insurgents went to battle against the Islamists in the city of Gao. They lost. Bigger man — two bigger men in fact — swallowed little man.

The Islamic insurgency first trumped the indigenous one and then turned its attention to national control, using kidnappings and spasmodic advances to heighten its profile. It’s been a long tale woe for the Tuareg, who first took on the French and later fought their secular successors on Mali’s anarchic desert battlefield. Newly besieged, their lands face further feudal rule, this time by Islamists.

Enter, or re-enter, the French, who whether ruled by Socialists or Gaullists still covet a muscular role in former colonial territories, particularly when response comes in the context of a domestically interpreted version of the War on Terror.

By chance, President François Hollande’s military intervention on behalf of what’s left of Mali’s southern-based, secular rule came as U.S. President Barack Obama met with Hamid Karzai in Washington, slowly bringing to an end what has been a near-useless, decade-long U.S. military effort in Afghanistan. Karzai, an overlord of a different sort, is in no position to dictate Afghanistan’s future, particularly if the country is left to its own devices. The Taliban has been neither crippled nor disarmed and waits like the Mali militias for an opportunity to reassert itself more comprehensively. There is and can be no U.S. “victory” in Afghanistan, no more than one was possible in the costliest “repair” adventure of them all, Vietnam. Locals will eventually decide the country’s fate.

But France’s connection to Mali, and the nearby Ivory Coast, Algeria, and Senegal, is admittedly deeper than anything the U.S. can boast in either Iraq or Afghanistan. France took control of the then-Sudanese Republic (later French Sudan) in the late 19th century. Bureaucrats speak French. President Amadou Toumani Touré, deposed in a 2012 military uprising and now in exile, was a French-trained paratrooper, and once a friend to Kofi Annan. Interim President Dioncounda Traore, a one-time Touré ally, also has old-school French ties.

Fractured but resource-rich Mali is now a kind of insurgent stomping ground (not unlike other parts of Africa), owned and managed by those most well-equipped, armed and organized at any given time. The northern militias benefited from the Qaddafi collapse, with pieces of the Libyan arsenal shifting south and put to work in the ongoing rebellion. Mercenaries are also in the chaotic mix.

Hollande’s effort is not so much an effort to “win” anything as an effort to lend heft to fading French-style secular administration in a part of the world Paris once ran. Among European nations, none has been has adamant as France in refusing the imposition of religious totems on its cherished republican society. Secularism is at the core of the French notion of nationhood, and its protection in post-colonial states a source of French pride.

Moreover, losing Mali to Islamist groups does regional investment prospects little good. France needs what its old lands have to offer (including uranium), as does China, which is investing heavily throughout Africa. Chaos serves no big government porfolio, and the U.S., even at the height of the Bush Doctrine, showed little interest in volatile central Africa, leaving that particular policing to anyone willing to do the job. With fragile Niger, Burkina Faso and Algeria all bordering landlocked Mali, France is eager to forestall Islamic influence, since such influence has become the centerpiece gimmick of this particular traveling puppet theater. Most ironic, however, is that the show’s founding actors, the Tuareg, have been made dispensable understudies to what they original envisaged as their command performance.