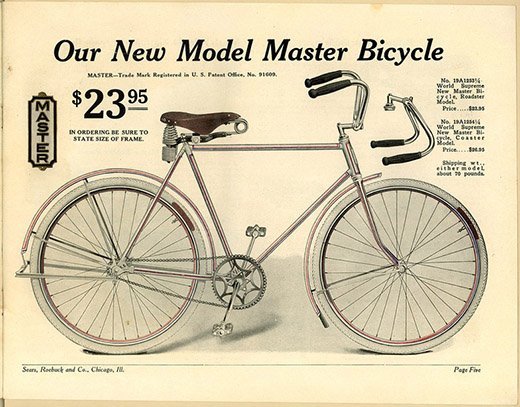 Once upon a time, a bike, not a phone, afforded youth a sense of personal freedom.
I

n the fall of 1964 my father taught me how to ride a bicycle in the back alley of our home in northwest Washington, D.C. We had bought the bike together at my favorite nearby department store and I had proudly walked it home.

But the lessons were unusual in that my father had never ridden a bike. Nor had my mother. They came, it seemed to me, from an alien generation that had dispensed with youth. Both seemed to possess an aversion to any combination of wheels and their guidance. We did not own a car because neither parental alien had a license.

Still, I attached the training wheels to my bike and listened as my father shouted insightful encouragement that depended on the words “steady,” “balance,” and “good.” When I’d lose my balance he’d prop me back up again and resume his three-word lessons.

I was grateful he took the time. I knew that after work he’d much prefer to be reading about the presidential campaign, of which I knew little except that the big Texan who had taken over for President Kennedy was being challenged by a senator from Arizona who was supported by the right-wing John Birch Society. According to my father, these Birch enthusiasts were not tree-lovers but “perilous extremists.” Unaware of what this meant, I chose to take the matter no further, focusing instead on my bike.

It was called a Freeway Flyer and once I learned to ride I discovered all sorts of worlds my leafy neighborhood had previously concealed. On weekends I rode across the lush park, rocks and creeks, to where most kids didn’t go, or weren’t allowed to. These were Washington’s sprawling Negro districts. There, I watched horror movies and made friends. Rodney was my favorite. He sold tickets at one of the movie houses. Rodney told me that I, too, could become a Negro if one night all my countless freckles conspired to merge. “So don’t be acting like you don’t know what I’m saying.” I didn’t, but I liked him even more.

A bike, I soon decided, was life itself. Nothing else was needed aside from an occasional movie zombie.

He was also an expert on zombies and the undead in general, a handy characteristic in a friend during the end-is-near nuclear age.

One evening, after I’d finished my bike rounds, my father all but demanded that I sit in front of the TV, a red Motorola, and watch a political commercial that had been produced by Lyndon Johnson, the big Texan who was running against Birch-man, Barry Goldwater. The ad showed a nuclear blast and starkly asked voters if they wanted Goldwater’s fingers on “the button.”

This ad was in bad taste, said my father. I should remember that taste mattered, as did restraint, particularly when it seemed convenient to abandon them. “Never hit below the belt,” he told me. “Never.”

It wasn’t difficult in the end for Johnson. He won in a landslide. Soon after, he went about dealing with the “Negro question,” pushing through civil rights legislation his rival would likely not even have considered.

Neither my father nor my mother liked Johnson, still in shock over Kennedy’s assassination. But he was an easy choice over his adversary, portrayed as a menace to humanity. If only Johnson hadn’t ruined his legacy by transforming the Vietnam conflict into a full-fledged war.

I came to understand all this much later, just as I now see a political landscape that perceives restraint as a loser’s affectation and hits below the belt as a matter of course.

But in 1964, my Freeway Flyer was all that mattered, that and my newfound sense of balance, which grew by the day until I could ride long stretches without needing to hold the handlebars. I returned to my favorite department store and added a speedometer, heady velocity at my downhill disposal. A bike, I soon decided, was life itself. Nothing else was needed aside from an occasional movie zombie.

This boyish headiness wouldn’t and couldn’t last. In 1966, my parents separated definitively. Seven years later my father died, too weak to remember his bike-rearing years. By then, I had a used car, Freeway Flyer given away. The “Negro problem” was not entirely solved and John Birch found another branch, many in fact, and they sprouted as never before. Recently my favorite department store, Sears & Roebuck, surrendered to the new retail order and filed for bankruptcy, driving the Freeway Flyer further into the realm of lost time and its friendly ghost, nostalgia.