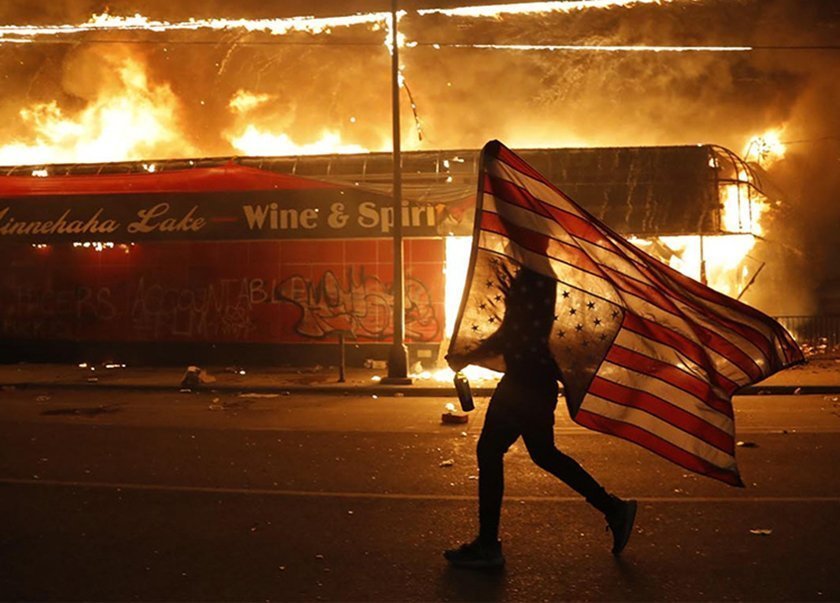 Since video footage of the late May police killing of George Floyd was released, rioting has swept the United States.
O

n May 25, 2020, police in Minneapolis arrested George Floyd for alledgedly using a counterfeit $20 bill. During the arrest, one arresting officer, since charged with murder, placed a knee on Floyd’s neck, refusing to relent even after the suspect complained he could not breathe. Floyd, 46, had been laid off as a bouncer as part of coronavirus-related cutbacks that have created a wave of unemployment in American cities.

A bad omen presented itself at the height of New York City’s strict coronavirus lockdown during which nonessential movement was banned. City police arrested mask-less youths who’d chosen to roam neighborhood streets as if free to do so. The detained were black, the arresting officers mostly white. New York’s progressive mayor, awash in virus-fearing rapture, defended police for upholding lawful medical restrictions. He downplayed any racial component, insisting the emergency and virus alike were colorblind. There was no two-track lockdown.

His was a failure of insight.

A free falling economy and rising unemployment was bad enough for those earning modest wages. But what about those with little or no financial wiggle room?

That the poor would get poorer was known. Less frequently discussed was what role lockdowns might play in decaying cities with large black populations, the nation’s (and the world’s) sprawling second tier.

No one calculated how the lockdown would affect the urban have-nots, many of them black.

The possibility of resentment taking on racial overtones – the American racial divide is deeper than most – was set aside to dwell on death tolls and infection rates.

There was little interest in examining the lockdowns in terms of their potential to revive separate-but-equal days of black-white segregation — a fact of American life until 60 years ago. Ignored as well was the sudden enhancement of police power, whether to clear streets or disperse crowds. With a virus running amok, few pondered the potential of picking at racial scabs.

Who had told newly jobless inner city blacks that police were not a threat to civil rights but merely the agents of disease prevention? It was just too hard a sell.

But the United States is a racial tinderbox. What if festering tension between police and the country’s racial underclass blew open? What if urban “vigilance” was twisted to include an act of police-state repression that would make the shut-in seem like a the fruit of a broader and more sinister plan?

And just as news outlets circulated the news that 100,000 Americans had died of the virus, just such a bomb exploded.

A white Minneapolis police officer stopped a black man alleged to have passed a counterfeit $20 bill and during the confrontation stepped lethally on the suspect’s throat, the horror caught on videotape.

Race aside, the film showed a hubris-swollen man in uniform applying homicidal force on a man begging to be allowed to breathe. Race included, it told a hateful story by now familiar to Americans who have come to know police brutality toward blacks and mass shootings as social constants.

The incident has led to rioting, looting, arson, very much in the vein of the events that followed the assassination of Martin Luther King in 1968. No justification exists for such acts. At the same time there’s little doubt this ferocious response is in direct proportion to the perception of lockdowns as an implicit form of racial caging.

This sense of caging wasn’t felt by those who accepted the shut-in as a road-bump, parrying their way to all manner of virtual activities. Most came came to the medical siege with house, home, and routine, or close. They agreed to a suspension of civil liberties to save themselves and others. Many had sufficient financial reserves to tide them over, if only barely. Their skin color exempted them from daily police scrutiny. In a word, the threat was the sickness only.

Not so in parts of many cities. Those whose livelihoods depend on licit and illicit commerce represented by street life were decidedly more vulnerable to seeing the lockdowns as a recipe for joblessness and dead-end despair. Those schooled in the racial rivalries between haves and have-nots, oppressors and oppressed, sensed their territory as invaded. Underlying suspicion and hostility subverts otherwise conventional notions of the common good.

Just as police tend to suspend protocol during emergencies, so underclass minions (and adversaries) sense the ante as upped and are quick to see any single acts of tyranny as a (new) declaration of war.

It should have surprised no one that virus edicts had the potential to set racial fires that would further weaken the half-undone racial compact. Playing “pretend” police state and toying with euphemisms (such as self-isolation) is fine until reality interrupts the lockdown game. It is then that an incendiary incident translates simmering resentment into Intifada, very much in West Bank style.

Easy, it would seem, to blame bigoted white police, or violence-prone gangs, or to heap scorn on a president whose speech is rarely much but snarl.

In a nation of deep racial tensions, the extraordinary response to COVID-19 was an invitation to underclass unrest.

Easy as well to underscore the bottomless depth of America’s 200-year-old racial divide, always at the seismic ready.

Far harder to say to those who depend on the urban throb of city streets that they’re indefinitely deprived of them. Far harder still to sever the many-layered commerce, in trade and gossip, those streets nourish. The street is a hive whose portals cannot be closed without have-nots coming to believe they are under squad-car control. Worse still, many in those cars loathe social welfare’s “profiteers,” which they identify racially. To thin out inner city streets by force is to light a fuse.

Unemployed Italians can count on a steady flow of funds. Not so for Americans of any color. Add racism and the social glue melts away entirely, leaving the policed underclass, who may well ask, “Whose public health? Which public?”

Where there’s smoke there’s fire, and sparks flew in New York City, virus central, weeks ago. No one chose to see them as a harbinger.

Stay off the streets meant just that, the black New York “defiers” were told, cuffed by police when they failed to behave.

Many mayors and governors in the virus’s intoxicating thrall refused to acknowledge the two-tier lockdown. The weight of sacrifices was the same for all, they insisted. In fact, there are (at least) two American alls.

The Melting Pot offered a Pandora’s box that when opened sent an old message: that many of those locked up “for their own good” had never felt anything but locked up, never felt “in,” thus doubling the offense taken.

Two plus two does equal four, and June’s violence seems less about the catchphrase “Black Lives Matter” than an uprising of captives pushed to the brink and beyond.

You wanted lockdowns to keep healthy. Fair enough. Yoga could tide you over. Those without it had time on their hands and nowhere to go, uniforms at the ready to keep misery’s peace. Time now to again reap the whirlwind.