Free World: America, Europe and the Surprising Future of the West 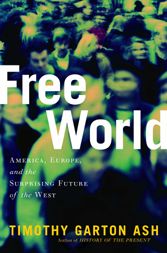 Garton Ash spent the early part of his career following the democracy movements in the Communist East Bloc. Here, he argues convincingly that helping advance freedom in places where subjugation still dominates is in the strategic interest of the West. He critically parses the political differences between the United States, Britain and Europe, but does not succumb to the leftist temptation to demonize Americans and American foreign policy.

The provocative and necessary discussion Garton Ash begins in the book continues on his site: freeworldweb.net