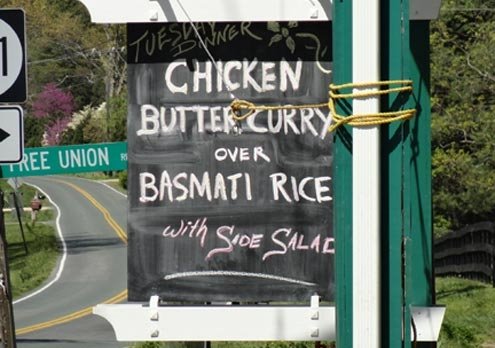 Rural roads with colorful names, and a store.
T

ake your time but hurry up, reads a sign that sits on front counter of the Hunt Country Store. Across the road Foxfield Race Track rests peacefully. Twice a year, University of Virginia students attend the races there, a collegiate crowd bacchanal that eventually leaves turkey vultures to peck at the remains of fried chicken and the sticky, leftover wine coolers.

I’m in Albermarle County, Virginia, near Charlottesville. My new job is my old job, at the same country store I left behind when I headed for Brooklyn, which a month later is also behind me — at least until school starts in late summer.

Hunt Country is located between roads with colorful rural names — Free Union and Garth. It’s a landmark that bridges town and country both in terms of geography and characters. From the store, you can push into town, population 43,000, or head towards Sugar Hollow to take a sweaty hike or dip in the watering hole, or both. Go further, toward Ivy or Crozet, and the view of the Blue Ridge is handsome.

The store faces William Faulkner’s old home, the place he lived when he was a writer-in-residence at the University of Virginia in the late 1950s. A foxhunt-lover with an aristocratic streak, Faulkner loved upscale country life and riding, which ended up killing him. He broke his collarbone in a fall here in 1959 and kept on falling. Three years later he was dead.

When my mother came back from Argentina as a girl, she lived in Faulkner’s house — until my polo-playing, diplomat grandfather purchased Twin Orchards, a farm that would become home to several winning race-horses and three dogs, Shoe, Cooter, and Gretchen. Shoe loved shoes and Gretchen loved fireworks. Cooter was content with dog food.

Today, Twin Orchards belongs to a successful New York City developer who turned my old room, “the spool room,” into a spa. We now live in new house facing a mountain after a two-year rental stint at Mouse Hill. Yes, Mouse Hill.

There’s no mistaking my summer quarters for urban streets. The store itself is a Jeffersonian utopia that entertains, “yeoman” farmers, construction workers, and a fair share of waspy tennis wives who have mastered the backhand but not the backburner. There are also occasional out-of-towners, most either lost or hungry.

The staff is eclectic. The owner is a Boston-native and the wife of a local professor. The employees include teenage boys, artists, top-notch equestrian show riders, and working moms. The boys mainly stock the fridge, wash dishes, and mop the floors while the women slice and cook, shuffling between kitchen and cash register.

Though the valley can be lonesome, food helps draws people out, transforming a country store into something more that a place where people buy basic goods, the Webster’s definition. It’s a club in its own right, with a cast of usual suspects that varies depending on the hour.

Early morning brings the egg and sausage biscuit crowd, people who scan the local newspaper and grab a quick cup of coffee. Some of them will do the same at dinner. They also come to gab and stare at my cousins, Katherine and Helen. Youth is a thing of beauty, which the geezers know. When Katherine’s at the register, tips roll in. Helen prefers to cook. Both are artists and mothers.

The Webster’s crowd sticks to the commercial basics, picking up Cheetos, Budweiser, and bubble gum, maintaining the ebb and flow while sandwich orders get made (the vegetarian special is called the “Sly Fox”; there’s also the “Italian Stallion” and pints of macaroni salad).

Widowed veteran Joe comes for a meatloaf dinner or daily java dose wearing a Hampden Sydney hat. He sits near the Coke freezer scanning the paper for new convicts — no one he recognizes, but it’s everyone’s business in the country.

Then there’s Heidi, a diagnosed schizophrenic and one-time friend of my grandfather. She’ll dip in two or three times a day for coffee, sometimes reminding us she used to have a beautiful figure (she’s still elegant) and paying if she’s on her medication. “Heidi is here!” yells my co-worker Savannah, when she zooms into the parking lot in her black Audi station wagon with its Church of England sticker.

There are also construction workers who pull up to the window as if it the store wasn’t a store but a McDonald’s that also stocks Marlboro 100s, not to mentioned frantic wealthy moms who want to know if we have gluten-free bread, no, and if the soup is dairy free, it’s not.

If there’s a lesson you learn from watching people eat and buy, it’s that everyone has needs, and that theirs own always come first, which can make city and country alike.