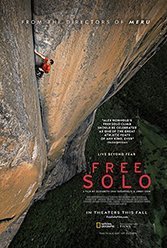 Most films are best seen with minimal knowledge of the production’s content, and in ignorance of the narrative arc and ending. The documentary “Free Solo” is an exception. Even knowing he succeeds, it’s difficult to sit through Alex Honnold’s incredible (in the fullest sense of that word) ascent of El Capitan, the 3,000-foot vertical wall of rock that dominates California’s Yosemite National Park. Honnold accomplished the four-hour, 3,000-foot feat without ropes, pitons, a parachute, or anything else that would prevent him —should he make just one wrong move —from falling to his death from the sheer face of one of the world’s most challenging cliffs. He carried only a small bag of chalk in the small of his back and wore shoes designed just for this mountain (to allow him to keep a toe on holds the width of the edge formed by two back-to-back quarters). Even knowing he had become the first person to succeed at this free climb, one of these reviewers repeatedly jumped in his seat, muttering “oh my God” while rubbing sweaty palms, then seeking brief respite in the bathroom (before running, as everyone else was, back to the theater).

“Free Solo” has pleasures beyond the thrills and chills —and sheer terro r— of watching Honnold’s historic, monumental climb, captured over several years by a camera crew skilled in climbing as well as photography. The crew itself is part of the narrative, its members expressing their concerns and anxieties as Honnold prepares, physically and psychologically, for the attempt. They worry not only that Honnold may die, and what it would mean to observe his fall, but also that they might unwittingly do something to contribute to his death.

That said, the focus is appropriately on Honnold the person. He’s at once handsome and geeky, fit but slight in stature, alternately talky and reserved. Friendless except for fellow hikers and later a girlfriend, he lives happily in a trailer as a semi-hermit. He’s a classic introvert, but one that understands himself as a warrior of the old school, preparing for battle with a most deserving foe. An MRI scan reveals a remarkably inactive amygdala, the part of the brain that deals with emotions and is responsible for triggering anxiety and fear. That surely helped Honnold slay his dragon, but theater-goers whose brains are fully functional will cling to the edge of their seats.