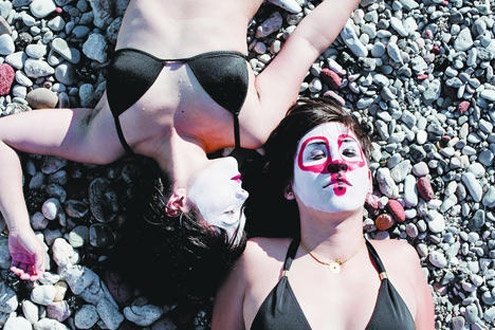 heatrical absurdity takes many forms in music. It can be an extended high note in a classic metal song. Or the striking visual baroqueness delivered by someone like Lady Gaga. Sometimes it’s many things put together. That’s where Yamantaka // Sonic Titan comes in.

The Toronto-based group describe themselves as a “psychedelic Noh-wave opera group fusing noise, metal, pop, and folk music into a multidisciplinary hyper-Orientalist cesspool of ‘east’ meets ‘west’ culture clash in giant monochrome paper sets.” If that doesn’t sound highfalutin enough for you, one listen to their latest album UZU (Suicide Squeeze) plus a quick glance at any press photos will put things into better perspective.

Core members Ruby Kato Attwood and Alaska B founded the group in 2007. The original idea was to explore of their Asian heritage, but since then Yamantaka // Sonic Titan has blossomed into a full-on artistic vehicle that includes large-scale theatrical performances as well as records and live performances.

The 2011 YT//ST gained notoriety for its abrasive but unique take on no wave, noise and prog-rock. But UZU buffers out most of YT//ST’s rawer moments to present a proper prog album that remains listenable even in its most self-indulgent moments. These tracks support prog tendencies with other influences.

On “Atalanta,” the opener, a simple piano line that wouldn’t be out place on a Styx album serves as a prog-rock signifier that then segues into the seven-minute “Whalesong.” But further along, “Lamia” sounds like a shoegaze track akin to the softer moments of Boris or early Asobi Seksu. “Seasickness pt1” is a beautifully understated piano ballad, no strings attached. “Bring Me the Hand of Bloody Benzaiten” uses skronked-out saxophone to color in the margins around the main polyrhythms. “One” sounds like a West African chant before morphing into sleazy stoner-rock with a round-robin chorus. “Whalesong” aside, the amped-up “Hall of Mirrors,” with its double-time kick drums and aimless soloing, is easily the most egregious prog offender. It’s barely four minutes.

The cohesive key to Yamantaka’s approach is its vocal restraint. Both Attwood and Alaska B sing but they never exaggerate to show you just how wide their range is. Instead, they prefer to lay down harmonic groundwork before moving on. It’s a gentle insistence. What you wind up most appreciating is how they know when to let their lyrics lead and when to let the music do the work — “Seasickness pt2 (Theme from 33)” is a great example of this. In short, there’s a little something for everyone with Yamantaka // Sonic Titan.

There was a time when prog-rock got a bum rap from the indie-rock community, appreciated ironically or by a small sub-sect of fans who came to it via their parents’ record collections. But in an age where the Internet apparatchik relentlessly burns bridges and eliminates gaps between styles, Yamantaka bizarrely, ostentatiously, and uniquely fly their freak flag. They do it for more than just prog, or Noh-wave, or even art. They’re approaching identity politics and the nature of cultural signifiers with all the resources they know how to use. UZU is just one more way both for artist and listener alike to dig deeper.