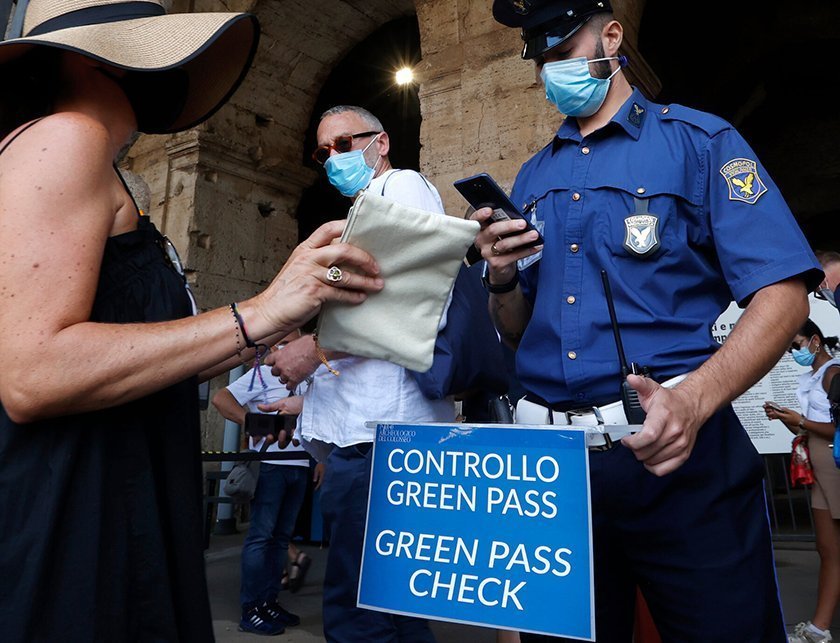 When it comes to public places and the workplace, Italy says Green Pass, proof of a negative COVID test, or stay home...
M

y ailing plumber resides in one of Dante’s less agreeable “new normal” cellars. He is desperately ill with liver cancer and its predatory offshoots, and can do no better than sleep most of the day. His is a kind of physical and mental shutdown that can work in league with terminal diseases, shutting down both body and will. When he does rise it is to stalk the bathroom, his second homeland.

He does not visit the hospital, though it is his right as a citizen (thanks to the Italian welfare state). Because he does not want to, or so he told me for months.

Over time, his reluctance began making less and less sense. He is, after all, married, has a Peruvian wife, many cousins, a half-brother — all the trappings of a traditional southern Italian extended family.

So why then this utter loyalty to sleep and sleep only, his sickness and its slippage be damned?

I pressed him hard enough the other day to find the answer, which was not so much shocking but medieval — though in this case the medieval comes in “lifesaving” modern garb.

He and his brother cannot go to the hospital because both refuse COVID vaccines and just as adamantly refuse to be tested. The same holds from his encampment of a family.

The usual reason for such resistance, at least in Europe, is religion, just as Jehovah’s Witnesses will not allow their own to receive blood transfusions or to submit to any number of standard modern medical practices. They consider this an invasion of their privacy and as such a defilation of their faith.

If you spurn the Green Pass, worrying that its chips contain too much information, you are, like my plumber, dead in the water.

This is not the case with my plumber. He is what Americans would derisively call a “denier,” someone convinced the virus is part of a conspiracy to have people injected with who knows what at who knows whose behest. He accepts that there’s been a sickness but sees it as a smokescreen, a pretext, a means to get people to do what they otherwise would not, in this case submit to a vaccine. More to the point, he dislikes rules and has little patience for national civics.

No one in his small friend circle has contracted the disease, and those who have made rapid recoveries, further fueling his calm but intense skepticism.

With Italy taking an usually hard line on vaccination — get it or get tested, or stay home — my plumber is at home, sleeping his way through liver cancer. He will not be admitted by local hospitals all of which are under orders to turn away unvaccinated people who refuse to be tested. For these patients, the public health care system is closed until further notice.

The medically enlightened might say “good riddance” to the likes of my plumber, not because they want him to suffer but because, in their view, the virus can only be tamed through zero-tolerance education. Breach this zero-tolerance (another Americanism borrowed by Italian speakers) and all is lost.

But my plumber has allies, not many but enough. People have taken to the streets to protest government edicts demanding citizens get so-called Green Passes, or proof of vaccine cards, which they’re asked to carry with them at all times. It allows them to work, dine out, see movies — in essence, a beginning of a return to what was.

But if you spurn this digital card, worrying that its chips contain too much information you have no wish to share, you are, like my plumber, dead in the water. Unless of course you’re tested twice weekly, and most objectors have no patience for this, bemused by the additional punitive measure of making people pay for these tests. Italy‘s unemployment rate tops 20 percent and the biggest loan shark in the land is the underworld, whose branches thrive from the north to the deep south. Criminal enterprises have seen a windfall in usury profits over the last 19 months.

Take my plumper’s situation before a developed world “tribunal” and he’d no doubt receive the Dante-esque sanctions he’s imposed on himself. By most social standards his behavior can’t be rationally justified.

Yet this takes us into the thorny meeting that comprises definitions of personal freedom, a matter Aldous Huxley took up in the late 1950s when he warned of new and different forms of tyranny, including that of accepting the hierarchical order of the Western workplace. By agreeing to become a worker in a large, corporate system was there not a chance of eventually losing track of what personal freedom meant? Could too much or too little choice become, even within a democracy, a microcosm of conformity, if not agreed-upon fascism in the name of the greater good? He was of course considered a “fringe” figure, if not a communist.

The virus stands for the now-outdated peril of eternal damnation. He has refused to buy into this. The result? Excommunication.

But the questions remain worth asking.

My plumber has been “legitimately” deprived of his human legitimacy because he will not accept medical guidelines, and by failing to do so is a kind of potential killer on the loose. If only he wasn’t afflicted with a disease likely to kill him — a disease which, for now, makes him the Mr. Sleepyhead of his vaccinated neighborhood.

If the hospital doesn’t want me, then I don’t need them, he tells me. He does not call the virus names. He does not rant or rave, nor does his half-brother, who was recently fired from his job for “vaccine defiance.”

As best they can, the fraternal heretics ignore the edicts of the church of science while trying to make life as palatable as possible for their mask-resistant families — difficult with one of them unemployed, the other enslaved by sleep.

If my plumber dies at home, so be it. He never did like hospitals. Nor will he budge from his position.

That the new bureaucrats are not bishops, cardinals, or popes makes no difference to him. Nor does their “alleged” commitment to the commonweal. To him, they are but controlling old bosses in 21st-century disguise, with a virus made to stand for the now-outdated peril of eternal damnation. He has refused to buy into this. The result? He’s been excommunicated. What, he asks me, has changed?

Nothing, he replies, since most see science as they once saw the Pope, as infallible, and do as they’re told.

Not him. Sleep is his sword, and he uses it well.