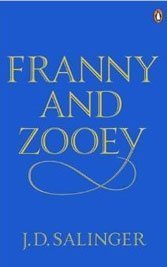 Set in 1955, J.D. Salinger’s two stories are coruscating portraits of 20-year-old Fanny Glass and her 25-year-old brother Zooey (Zachary) Glass, the two youngest members of a sprawling New York City show business family packed with wordy geniuses (“experienced verbal stunt pilots…”). Their infinitely well-read mentors are older brothers Seymour and Buddy, both troubled to the hilt: Seymour committed suicide and academic Buddy, like the later Salinger, is a recluse. The sage but stricken older brothers cast a shadow over sensitive and cranky Franny and Zooey, radio quiz show veterans schooled in both Eastern and Western religious philosophies and intolerant of fools (present in abundance in their midst, or so they think).

Franny is introduced as she meets Harvard boyfriend Lane at the Harvard-Yale game. Lit major Lane is posed and pompous while frail, self-loathing Franny (“I’m so horribly conditioned to accept everybody else’s values…”) struggles with the day-to-day. In the end, all she can do is faint — “I’m just sick of ego, ego, ego…”

Next up is cigar-chomping, former radio quiz show ace Zooey, his oyster the family’s East Side Manhattan apartment, home to “psychotics and psychopathic prodigies.” Nervous breakdown-inclined Franny has dropped out of college, intent on making her way toward God by sleeping on the sofa and repeating the Jesus Prayer. Brother Zooey has a promising acting career ahead of him but is dogged by ulcer-inducing impatience.

It’s up to Zooey to give weepy sister Franny a talking to (he’s suspicious of jargon-spouting shrinks), and that he does, using his sweeping intellect and brother-girded sidebars on religion gradually pry her from “tenth-rate” self-pity (“…All this hysteria business,” he says in a line the 21st-century could badly use, “is unattractive as hell.”) Zooey’s mature artistic and moral message to his in-a-mess sister: avoid sentimentality, don’t imitate, worship with detachment, “shoot for some kind of perfection, and on … your own terms,” and take time to appreciate “this goddamn phenomenal world.”

If Holden Caulfield existed at least in part to repudiate the conventions of the postwar American world around him, parked sullenly in some unmoving self-indulgent adolescence, Zooey’s roaring ties to Franny undo that more hostile side of the Salinger equation. Taken together, Franny and Zooey —”we’re just freaks, after all” he repeats — are the doubt-stricken but hopeful side of the American 1950s. They might loathe the stupidity of the conformist Establishment, but they also love life and thought, taking each seriously, and Salinger’s tuned-in attention to his kids and their moods and ideas is contagiously moving.