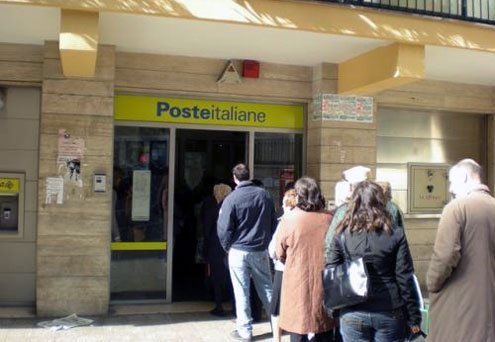 Lines are a fact of life, and few complain.
E

ven after all of these years in Italy I still haven’t mastered the art of menefreghismo. For those of you don’t know the term, let’s just say it’s something that Italians do oh so well. They’re specialists. Menefreghismo is embedded in their culture.

The word menefreghismo means to not care about something or to have a couldn’t-care-less approach to life (“me ne fregho” literally means “I don’t give a damn.”) The menefreghista is a someone who couldn’t give a rat’s ass about anyone or anything that crosses his or her path and will likely annoy you as a result.

I’m not sure how much of this behavior affects the rest of Italy, but I can assure you that among major cities Rome is the undisputed champion of world class menefreghismo. It’s even a training ground. Those who do the hiring for the post office, banks and government offices appear to have an annual menefreghisti quota (particularly when it comes to those assigned to deal with important documents). It’s safe to say being a jerk is prerequisite to landing a job in any of these fields in Rome.

Take the post office. I a want to crawl under a rock every time I see a poor tourist take a number for service. They have no idea that it might take an hour just to buy stamps. An hour. In what upstanding European country is that normal? I don’t know how many times I’ve stood in an unmoving and disorganized line just to pay a utility bill (with online service about a decade behind, most Italians still pay their bills at their local post office.)

Understanding the why of this means understanding Italian organization and focus, or lack thereof. State employees talk to one other or send text messages without worrying about growing lines or backlogs. Pure menefreghismo. Union efforts in the 1960s and 70s all but secured them lifetime jobs. State officials can’t be fired — except maybe for treason. Your job is never at risk because of incompetence or disinterest.

The situation gets my blood boiling, but when I look around me I rarely see anyone complaining. I’m often the only one who seems bothered. Do these weary customers really have a day to waste in the post office? I don’t.

The only reasonable conclusion that I can come up with is that the bill payers are either hired by working professionals to do their dirty work (some are relatives do it for their kids) or that the line waiters are on their work lunch break. If the process takes longer than expected, chi se ne frega? Who cares? It’s a vicious cycle.

Bank operations are spectacularly lazy. How many times have I walked into my bank to find one window for 20 or more waiting customers (never mind that most banks are open only five hours a day, mostly 9 a.m. to 1 and 3 p.m. to 4:30). You’d think maybe management would open up another window to avoid alienating customers. But no. The Italian bank system, like the government offices, can afford smugness. Employees are less secure, but the bank officials fall back on a classic power position: They hold your money, so you’ll wait (this ties into another Italian watchword, “arrangiarsi,” which basically means “working things out,” and suggests that given “menefregismo” it’s up individuals to figure out their day-to-day as best they can, legally or otherwise; easier said than done.)

One day I lost it. “This is crazy,” I said out loud in Italian. “Do you think we have nothing better to do then stand around at the bank all day?”

Everyone looked at me as if I were crazy. Most just shrugged their shoulders. The truth is that they’ve given up. It’s the norm. Meanwhile, the professional menefreghisti continued pacing around the mostly-quiet bank branch as if they were on the Wall Street trading floor.

My worst experience came at the municipio, or city hall, when I applied for a carta d’identità, the national identity card that’s fundamental to transacting most legal and personal business done in Italy.

After nightmare stories from friends, I decided to take the day off to accomplish the task. The stories didn’t do the day justice. First I waited three houses in line. Once at the window I was told I was in the wrong line. I had to pick a new number for the right line. More waiting. Finally I was called. Window no. 2. Just as I reached it, the woman taped up a sign stating that she was going on a “15-minute coffee break.”

Even more fantastic is that she wasn’t really being whimsical. By law, she’s entitled to take a coffee break, or “x” number of coffee breaks, at her discretion. Wonderful. Taking a full day was a smart choice.

When I’ve had a bad day at work I often come home and tell my Italian husband Fabio about it, or try. Let’s just say he’s not a man of many words. But when it comes to bad service and endless waiting he hops on the same bandwagon. Work is so stressful, he tells me. He so stressed. Why does he even bother?

And what’s the answer to all of this, I ask him? He turns to me and shrugs his shoulders, “siamo fregati,” he says — “we’re screwed.”

Words to live by.