Franklin and Lucy: President Roosevelt, Mrs. Rutherfurd, and the Other Remarkable Women in His Life 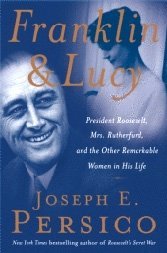 A bit of history: My grandfather refused to speak to his sister for four years after she voted for FDR. After reading this book, I understand why. Holden Caulfield would have called the inventor of the New Deal and Lend Lease a “phony.” Ever charming and exhaustingly competent, Roosevelt was also chronically prone to strategic “divergence” between word and deed. The book focuses on Roosevelt’s many extra-marital female friendships (including his formidable mother), and in particular one with Lucy Mercer Rutherfurd that almost broke his marriage and endured in secret for decades. Talk about character issues.

But far from cementing my Roosevelt prejudices, this paragon of historic research and writing turned them on end. Paradoxically, the Rutherfurd affair probably transformed Eleanor Roosevelt from Edith Wharton to Nobel Prize material. But Roosevelt’s complex personal relationships, far from being distractions, may have made possible the shouldering of polio, paralysis, Depression, and a world war.

Persico, author of another Roosevelt best-seller (“Roosevelt’s Secret War: FDR and World War II Espionage,” 2002), writes like a sensitive novelist, revealing the magnitude of FDR’s physical struggle and appetite for life. FDR had a deal with the press that would unimaginable today. Imagine a presidential candidate who spent months on a houseboat in Georgia with personal secretary Missy LeHand and a buddy who liked to go without pants. But if the result is profound and long-lasting achievements such as Roosevelt’s, bring on separation of the personal and public spheres; all hail happy hypocrisy!