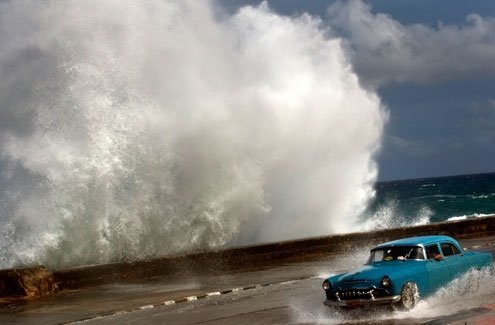 atellite imaging has made great storms into celebrities with built-in publicists. Their run-up has its own staging. On the hour come pictures of vast and ghostly scythes followed soon thereafter by ritual warnings and images of the damage the storm has caused elsewhere. Salted descriptions — “historic” and “devastating,” “monstrous” and “menacing” — are added to build on a pre-emptive crescendo intended to give the jaded or the distracted pause for thought, and worry.

As hot air and cold collide effervescently above, so high-tech forewarning is mated with old dread below, contriving a separate but equal havoc. Mundane meteorology, once summed up by a man in front of a rudimentary map with a poker, is now a highly organized, hounding video burlesque almost as agitated as the weather it portrays.

Most ancient civilizations looked to weather as a harbinger. It provided entertainment and signs. The worst signs, unpredicted of course, were earthquakes or great storms, often explained as the expression of a displeased god. Myth was laden with stories of volcanic eruptions and vanished landmasses. Devastation was the ultimate and least controllable caprice.

Now, the intensely colorful act of prediction is part of the caprice itself, with all that flows from storm forecasts helping to feed a parallel fascination for, if not addiction to, the many trimmings of anxiety. For the impressionable, storm narcosis is a panic attack with pictures.

Centuries later — irony is timeless — elaborately crafted prevention contains its own kernel of folly, since the annotation and repetition of peril, however dutiful, services a more general public apprehension that — absent terrorist attacks — red-alert weather stands in for. Twenty-first century citizens, though infinitely informed by the digital, are worried villagers in disguise.

Part of this storm mania is overspill from a four-decade-long nuclear fretfulness that began in 1945 and lost steam in 1990, with the Soviet Union’s collapse. At the height of the nuclear scare, mostly in the 1950s and early 1960s, weather patterns mattered less than fallout maps and apocalyptic post-nuclear scenarios. People literally feared the end of the world, and rightly so. Hydrogen bombs and bilateral threats made such an end entirely plausible.

With that menace largely withdrawn, the survivors of nuclear-age anxiety foraged for a new peril, which Sept. 11 delivered uniquely, but in one-show-only terms.

As an anxiety cow, bad weather is more recurrent and reliable. Complicit a brave new (visual) world, it’s the haute cuisine of postmodern dread, lately its own art form. Nuclear-age students of overkill are now followers of the Weather Channel, with meteorologists the eager facilitators of what can sound like the troop movements of military campaigns. Language turns bellicose: “Hurricane Sandy blasted across eastern Cuba on Thursday headed for the Bahamas…” Storms as photographed from space provide images that moderns can snack on to indulge their pre-illuminated side, with mass media complicity (“Hurricane Sandy is concerning meteorologists who fear it could mutate into a ‘Frankenstorm’ as it merges with a winter storm in the run-up to Halloween.”)

Chance alliances wind of and temperature get names to help personify them as louts or serial killers eager to clean up on man. Their “maliciousness,” based on the lives they ruin or end, is then transmitted with an excitement that often borders on reverence, since very little is more obliging than a big storm when it comes to suggesting mortality without succumbing to it.

Unless you happen on a falling skyscraper — or a witch burning.