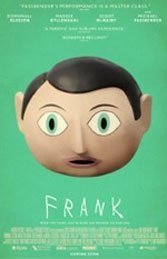 It’s never too late to have a tormented childhood. In the Irish film “Frank,” suburban Jon Burroughs (Domhnall Gleason) is a nice-guy keyboard player who lives with his parents while his musical ambitions languish. Opportunity knocks when a touring band finds itself minus a keyboard player (he tried to drown himself) and band manager Don (Scoot McNairy) asks Jon to fill in.

But this isn’t just any band. It’s the experimental Soronprfbs, whose charismatic leader and mystery mentor Frank (Michael Fassbender) wears a papier-mâché head-cover he never takes off. Franks likes Jon and brings him aboard, and off the band goes to an isolated Irish country retreat to record an album. But the recording sessions drag on. Ever polite Jon has to deal with jealously tumultuous fellow band-member Clara (Maggie Gyllenhaal) — she plays the theramin, a no-touch synthesizer offshoot. Nor does he get much love from drummer Nana (real life drummer Carla Azar) or French bassist Baraque (François Civil). Then there’s Don, whose own demons include an attraction to mannequins.

For Irish director Lenny Abrahamson, madness and creativity are bosom buddies. But creativity aside, Jon may be the only Soronprfbs member who hasn’t spent time at least some time in a mental institution. All this comes to a head when the band gets an invitation to play at a popular American music festival. Stirred into a tempest of destructive emotions, the band teeters on the brink. Stephen Rennicks’ music fuels a darkly funny “be careful what you wish for”story about creative genius — with Fassbender’s eccentric Frank as the key character — and the practical and psychological cost of keeping a bunch of very talented but quarrelsome musicians together.

The film was inspired in part by the Frank Sidebottom character created by British musician and comedian Chris Sievey. Sievey’s Sidebottom wore a papier-mâché head while singing for The Freshies.