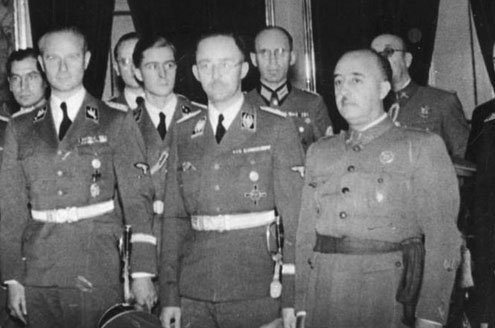 Franco asked for, and got, help from Nazi Germany.
W

hen Western Europe looks to Syria its historical conscience remembers the Spanish Civil War. Not so the United States, which had yet to acquire internationally maturity when that 75-year-old conflict exploded.

In 1936, disenchanted Spanish army officers toppled the country’s secular legislature, touching off a three-year conflict that stills ranks as among the bloodiest in modern times (500,000 dead; 450,000 refugees). On one side were the Republicans, a mishmash of liberal democrats and Communists. On the other were the Nationalists, avowed anti-Communist military officers true to trendy Falangism — in line with Mussolini’s Fascist state — but with a monarchist contingent in the mix.

The Republicans sought but received little official Western European support, undone by their Communist leanings. Soviet Russia and assorted Marxist groups took their place, though most outside fighters were idealistic volunteers or mercenaries. The Republican side was the intellectual battle cry of the day, with George Orwell in uniform and Ernest Hemingway writing pro-Republican dispatches.

But the Nationalist had the military advantage. Mussolini dispatched 100,00 troops while the incipient German air force honed its skills on Republican targets. Hitler saw the war as a Petri dish for military machinery. In 1937, Luftwaffe bombers leveled the Basque city Guernica, a precursor to similar air raids after the outbreak of World War II.

Though the Guernica bombing outraged mainstream European states, they remained gorged by the post-World War I status quo and sat tight. England and France signed a nonintervention agreement while the League of Nations remained neutral. Washington officials, mired in Depression-era politics, worried more about Hitler’s rise than Spain’s fate. Moscow, eager to make Bolshevik inroads wherever it could, promised not to meddle but did the opposite.

But Soviet assistance wasn’t enough. Franco’s Fascists finally won, starting a 50-year-old military dictatorship whose legacy, like the Iraqi rule of Saddam Hussein, remains open to political interpretation. For some, Franco was instrumental in modernizing Spain; for others he was a depraved, second-rate tyrant. The reality is somewhere in the middle.

Which brings us to Syria, which may seem like improbable leap but isn’t.

There, the Franco-like regime of President Hafez al-Assad took power in 1970, established secular militarism, and swiftly built up a large army, air force and police. At times in the 1960s and 1970s Gaullist France grew fond of Assad’s approach, or disapproving of Israel’s; it furnished Mirage jets and money, means to show off its Middle East clout. The Soviets did the same.

In 2011, the latest Assad regime — led by Bashar, son of Hafez — was challenged by a mixed bag of rebels, mostly Assad military defectors and Sunni dissidents intent on overthrowing the government’s Alawi Muslim elite, bad news for country’s minority Shiite population. Though the rebels billed themselves as a united force, rifts emerged within months and have since deepened.

Syria, like Spain, was snapped in two. Assad relied first on traditional allies Russia and Turkey, but when the latter peeled away he turned desperately to battle-trained Shiite Hezbollah forces in Palestine, eager to make a regional mark and protect their own.

On the rebel side, fighters gradually morphed into a loose confederation of inner armies and patrols openly backed by guilty France, less openly by Britain, and now in line for aid from the United States. For France, failing to help topple a tyrant seemed like a Franco-like mistake for the second time in a century.

Recently, in line with warnings issued by Libya’s assassinated Col. Moammar Gadafi, Islamic extremist fighters seeking a Sunni caliphate have permeated rebel ranks. It is their growing presence that has kept Washington from pledging wholesale allegiance to a clearly rickety opposition.

While it’s easy to deplore the Assad family’s authoritarian rule, few chose to for decades. Instead, the regime was seen as a volatile but vital player in regional brokering.

But the civil was has changed things for Europe, which, to ward off old ghosts, sides against tyrants in any local fight. As a result, a complex civil war has been oversimplified — “good rebels, Franco-like Assad” — to create palatable public theater that casts the Syrian opposition, no matter its provenance, as an agent of enlightenment.

But the Syrian conflict, like Spain’s, is ignoble to the core. Each side seeks to annihilate the other using any means possible. Russia, pretending itself back to expansionist 1935, supports the tyrant it knows; France, Germany, and Turkey, wary of Russia, talk up the hodgepodge rebels (as do wealthier Arab states, mostly to please Washington and to destroy the once-envied Assad dynasty). The United States has also formally decided to equip rebels, though not without 1935-style reluctance.

This leaves still-guilty Europe to champion one side of an infinitely murky conflict that, geography aside, reminds it viscerally of 1930s events through which it slept-walked, soon to pay a profound morning-after price.