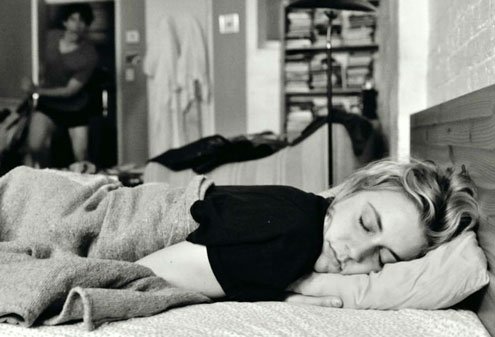 Paris on a credit card turns out to be a sleep-over.
F

rances Ha is a new indie film from Noah Bambauch that stars Greta Gerwig and follows a young woman trying to cope with life in New York City. Vassar graduate Frances is an aspiring modern dancer, a gentle way of saying she’s unemployed. She loves her best friend and roommate Sophie who quickly ditches her for a boyfriend and the illusion of a sophisticated adult life. This leaves her friendless, roommate-less, and sees her hopping from apartment to apartment. She’s in her late 20s but seems younger; sports a leather bomber jacket, a book-bag, and trips over trash; has friends but sometimes seems isolated. She struggles to make ends meet.

I’m about to become such a woman.

I saw the movie with my mother in Charlottesville, Virginia, my hometown, while back from New York, where I’m headed soon for a year of graduate school. Sitting in the cool and nearly empty theater with popcorn and a giant soda, I couldn’t help noticing that the tiny audience belonged to the generation ahead of Frances (and of me), a one that appears to see twenty-something youth as something of a unique and mysterious tribe. I vainly congratulated my own kind for being so provocative.

After the movie, I searched my 60-year-old mother’s face for a reaction. Though the film’s racier aspects (crass talk about sex and boys) put her off, and she commented on the ugliness of the young men from time to time — as if to comfort my single status — the conversation soon moved on to cooking and dinner.

But the self-awareness comes at a price. Frances is isolated and running out of steam as her once-dreamy future slips away. She’s struggling to get comfortable with the greyer areas of life and to hunker down.

In her, I saw my own resistance to “practicality,” my bohemian restlessness, my constant personal reevaluations, and my fleeting romances. I also saw hideous bank statements and my coming New York reality: student housing (yes, dorms) and not some glamorous West Side apartment or Brooklyn brownstone. Reality isn’t the movies, no matter how realistic the script. One step below the not-so-silver screen (and rarely on it) is dealing with the bare necessities of day-to-day life. Life doesn’t come with a soundtrack.

“This is a story of a 27-year old girl in the city, and that is about struggle,” said director Bambauch in an interview. Though Gerwig, who co-wrote the script, plays Frances cheerfully, joy is hardly the only side of making it sanely through your 20s. “In your own head, that can be agony,” said Bambauch, who is in his 40s. “It can be a very hard time for people – it was for me. There is a much more serious version of this movie.”

He’s right. There is a more serious version of this film.

Gerwig’s Frances is spirited and idiosyncratic. She’s loyal to herself, to her friendships, and makes you laugh. She stays positive in bad situations. She gets hurt but copes. There’s no wailing Greek chorus.

Her exuberance, I admit, helped temper my own agonizing about the future. I know I need to hunker down and find a sense of place — literally and figuratively. More important, I’ve come to accept it as an unromantic process that, while it might bring me joy along the way, certainly isn’t made from it. Life is serious. And in some ways just knowing that is a relief.