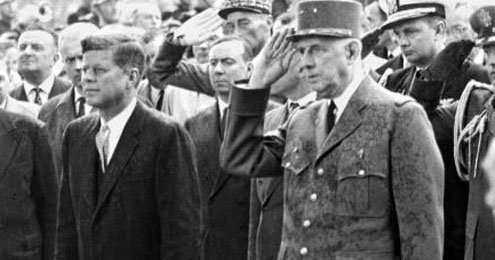 utsized Charles de Gaulle chafed at the hint of orders. From the United States. From Europe. From his own unions. His intuition was France’s, or so he believed. Nuclear Test Ban Treaty? Nonsense. He’d test in the Pacific at will. Superpower first-strike force? He’d build his own, a Force de Frappe, he called it. Middle East politics? Damn subtlety. He’d back Arab nationalists over neophyte Israelis. As a result, Egypt and Syria got the Mirage fighters they used to no good end in 1967 and 1973.

Gaullism depended on often-arrogant whims of its vainglorious eponym, whose wartime triumphs shooed away critical self-awareness. By the time he stepped aside for good in 1969, France was mired turmoil. Regret was not his style.

The general’s best and worst traits are evident in the opportunism of French President Nicolas Sarkozy, who also likes standing in for motherland France, in the process showing up a European Union that notwithstanding years of work still lacks both an effective executive structure and a credible collective identity.

If there’s a difference between “politics of grandeur” de Gaulle and postmodernist Sarkozy, the hippest of heirs, it’s deftness, which the general, being a general, generously lacked.

Sarkozy’s recent salvos are a case in point: The first was the expulsion of the country’s tiny Roma minority; the second, less high-profile in media terms, was his government’s ramming through of an increase in France’s once-sacrosanct retirement age, from 60 to 62. Though the Roma decree produced EU outrage, it was timed to distract debate from the explosive retirement question, another small step in the controversial dismantling of France’s costly social welfare system.

By expelling the Roma, Sarkozy tossed a bone to a constituency increasingly unhinged by the onslaught of unskilled foreign labor and the overall diminishing of Frenchness. Like it or not, France is now well on its way to multi-ethnicity, a long-term migration bargain it tacitly bought into when it co-opted parts of Africa and Asia.

But de Gaulle’s postwar France was largely white. After Vietnam and Algeria were lost under duress, France issued few melting pot invitations. Its blue-collar troops largely closed its ranks to outsider, xenophobes folded into its hard core. This defensive state of mind, a residual piece of Gaullism, persists and thrives.

In an ethnic minefield, Sarkozy channeled the satisfying of resentments toward smaller minorities, and away from those flirting with middle class status.

In jumped the European Union, deploring French insensitivity to basic human rights, which yielded Sarkozy’s sotto voce de Gaulle side (“I can’t let my country be insulted.”) Any wonder, he could imply, that the Union’s most self-righteous voice, that of Justice Commissioner Vivian Reding, was that of a British woman, a combination France has deplored since well before the first Queen Elizabeth?

Just as de Gaulle knew the incipient European Economic Community couldn’t survive without Washington, Sarkozy is well-aware the EU (which from Paris’ viewpoint is cultural and political adjunct of France, not Germany) has more bark than bite.

Since the 2002 elections, whose first round saw the National Front’s Jean-Marie Le Pen outpoll socialist challengers for the chance to face Gaullist Jacques Chirac (Le Pen was routed), it’s been evident that parts of France resist immigration, all the more when incomes are hard to find.

But maintaining social welfare is a fiercer sticking point than race, and the passing of the retirement age legislation saw Sarkozy inch closer still to a diluting of the hallowed entitlements that remain the only battle-cry of an otherwise moribund French left. In 1968, de Gaulle challenged his striking unions with police. He adamancy briefly put leftist student and union leaders in same bed. The combination eventually killed him.

Sarkozy’s strategy buys time by playing to anti-foreign sentiment (the Roma expulsions), a domestic trap into which Europe’s machinery has fallen, focusing French passion and debate on meddling Brussels. Debate regarding welfare and labor reforms, which underlies France’s future national prospects, can be briefly subsumed into the larger brouhaha and the left’s attention distracted between human and worker rights.

At home, Sarkozy can play benighted nationalist, a card France never mocks lest it mock itself. He’s unworried by bully status among EU rights commissioners and quick-trigger NGOs because only the home front votes.

As a latter day de Gaulle, Sarkozy is nobody’s fool. While the general would have flayed all sides without thinking, indulging ego over reason and electoral policy, Sarkozy is choosing just where to toss his smoke bombs, hoping he won’t have to inhale any of their fouled air.