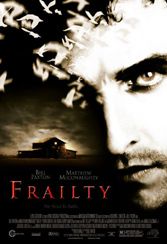 Efficient is a good word for Bill Paxton’s acting. Strong in “Apollo 13” and stalwart in “A Simple Plan,” he’s always walked an honest path. In his overlooked directing debut, Paxton slides over to the American dark side in a skillfully disturbing story about a religious fanatic father (a rural man named Meiks, played by Paxton) who “cleanses” for Christ and holes up his brood underground.

Encroaching demons justify murder, at least the way one of Meiks’ sons, Fenton, an escapee from the dungeon, explains it to authorities (Matthew McConaughy is brilliant in the role).

The ever-leering and permanently ambiguous Powers Boothe plays an FBI agent (alert choice by Paxton) who is trying make sense of both the killing and the family. Just as the story line — molestation included — appears to come into to clear focus, it unravels. What’s alarming is how much the unraveling makes sense.

Better than good, both as a directorial debut and as a movie that knows what it wants from a stunned audience.