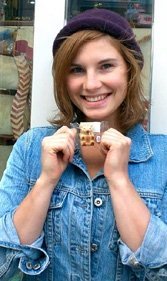 hile I was in college my mom had an annoying little habit I was hoping she would break once I moved to Italy after graduation.

Using her mother radar, or her mother super powers, or whatever else it is that moms use to find out about things, she used to hear about crimes, accidents and general mischief and call me immediately. For a while I thought she might have connections at the police department, even though I went to school a good 300 miles away from home.

“I heard there was an accident near campus.”

“I heard a girl got drugged at a frat party.”

“I heard a house got burglarized. Are you locking your doors?”

My first seven months in Italy went by fine with only the normal how-are-you-doing phone calls. And then recently that changed. I got another one of those calls.

“I heard an American girl studying in Italy killed her roommate.”

Even thousands of miles away in another country, she managed to do it again. Because I live in Florence and work for an American university’s study abroad program, she was calling to make sure it wasn’t me or anyone else I knew.

Once I put her mind at ease and she let me hang up, I was the one who wanted to know more. I asked my school’s director if she had heard anything. She said yes, a 21-year-old British girl studying abroad had been murdered. In Perugia, not Florence though. Authorities weren’t totally sure who did it but the girl’s roommate, a 20-year-old American, was under suspicion.

Oh well that’s just great, I thought. Now everyone is going to hate us even more. As if American college students abroad don’t already have a bad enough reputation as it is.

I went online and read articles, some from Italian papers, and others from the states. Meredith Kercher had been sexually assaulted and murdered, I read. Her roommate, Amanda Knox from Seattle, and her Italian ex-boyfriend along with two other men Knox knew from the bar where she worked were all suspects. Some articles even mentioned possible drug use. All of them alluded to the wild life of students studying abroad.

Fantastic. We used to just be drunks. Now we’re murderers. It doesn’t even matter if this girl in Perugia is convicted, I thought. The damage is done.

But what I’ve found in the couple of months following the initial media frenzy over the case is that no one really cares. While scandalous headlines were printed and the story was talked about, nothing is really different.

“I don’t feel like it matters,” says Todd Behrman, 20, a junior at Davidson University, studying in Florence for the fall semester. “It was a single, isolated incident. It’s not like American students are going around killing people everyday.”

Well, yes, that’s true, but doesn’t it sometimes only take one bad apple to spoil the bunch? Won’t people hold this against us Americans? Maybe I imagined the worst when I pictured myself walking into a store and having people whisper, “Ugh, look, an American. You remember that one girl in Perugia…”

I’m pleased to report that things are not that way. Not in Florence or Rome, both cities teeming with American college students. One student studying in Rome for the school year, 21-year-old Carla Avendando, a junior at the University of Florida, said this incident hasn’t had a negative impact on her experience abroad at all.

I imagine it must be different, though, for those who are studying in Perugia. I know if I was there, I would probably think twice before ordering that second beer at the bar or even staying out too late. It’s hard enough dealing with the stereotype that all American students do is get drunk and rowdy. I can’t imagine having to also fend off suspicious glances.

One student I spoke to in Florence, also said she wouldn’t feel comfortable in Perugia. When her parents suggested Perugia as a day trip, she told them no thanks.

“I wouldn’t feel safe,” says Allison Chait, 19, a freshman at Florida State University. “Just walking down the street I would feel like everyone was looking at me, judging me.”

And maybe they would be, but let’s face it, until American students in general clean up their act, people will always look at them funny. The incident in Perugia just gave some people a new reason to talk.

About the Author: Angie De Angelis

Angie De Angelis graduated from the University of Florida with a BS in Journalism and a minor in Art History. During her junior year she studied in Florence for a semester and fell in love with everything about Italy. She is now a graduate counselor with Florida State University's study abroad program in Florence. She also writes for Vista: Florence and Tuscany, a culture and entertainment magazine about the area. In her spare time she enjoys eating, traveling, and reading.