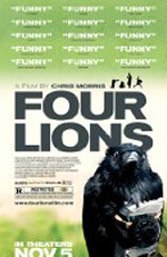 Christopher Morris has delivered a small miracle, a screwball satire about terrorism that’s at once funny and sad. Entering homegrown terrorist territory after the July 2005 London attacks was daunting enough — some distributors balked at first — but coming at it through madcap humor seemed commercially suicidal. Morris makes it work by sticking to his premise: a plot in the wrong hands is literal lunacy.

“Four Lions” tells the story of a group of Pakistani Muslims determined to act out a hometown Jihad. There’s Omar (Riz Ahmed) a young security guard with a wife and child. He’s bright, angry, confused. His closest friend is Waj (Kayvan Novak) is a Lenny Small-like hulk, a sweet but snarling half-wit who imagines a suicide attack as a road to Xbox heaven. Barry, aka Azram al-Britani (Nigel Lindsey), is a bearded lunatic who’s appropriated Islam to suit his own array of conspiracy theories. With two other blunderers, the townies devise a hip-hop non-plan that finally sees them hopelessly clad in theme park costumes.

Morris gets the things started with a portrait of sure-thing losers who know only to call each other “bro” and play dumb and dumber by turn. “Don’t screw with my jihad,” shouts Omar, trying to rein in his scatterbrained loonies. But the explosives (“silver nitrate from Amazon”) just don’t behave, and the film’s comic first two thirds veers ominously, ultimately leaving the good-natured losers with nothing to lose. Omar is Morris’ catalyst, a middle class local who wants “do” something, to count for something, to stamp martyrdom with a personal identity. Radical Islamic speechifying fails him. But his band of brothers can’t get past detonating sheep and crow. “You were much more fun when you were going to blow yourself up,” Omar’s wife tells him when he starts moping. So he returns to “fun.”

Since 9/11 and London, Islamic terrorism and screwball humor have refused the same stage. Not here. In this vision, terrorism is farce, deadly serious but still farce. Its inept but sympathetic players are impressionable, vulnerable, and their own worst enemies. Morris fathoms this as no one else before him and delivers his slightly-too-long package of life and death with applause-worthy gusto.