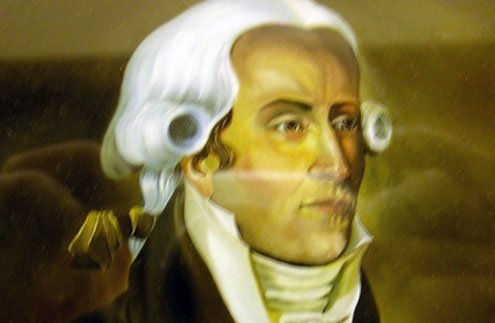 Mazzei, who had been living in London since 1758, obliged. When he arrived near Williamsburg, Virginia with his future wife, personal tailor, and a small group of winegrowers in tow, he was received by some of the day’s most prominent men, including George Washington, a senior officer of the U.S. Army at the time. Mazzei toured the rolling countryside with Franklin, who took him to Charlottesville where he met Thomas Jefferson, then a circuit court lawyer living on a sprawling plantation called Monticello.

Initially, it was a deep passion for viticulture that drew together Jefferson, a connoisseur of fine wine, and the articulate and compelling Mazzei. Jefferson gave his new friend 193 acres of land adjacent to Monticello to plant vineyards. Mazzei purchased an additional 400 acres and called his neighboring estate Colle, “hill” in Italian. It was a show of respect for Monticello, the “little mountain” that lorded over 5,000 acres. Mazzei planted and maintained the first ever vineyards for Jefferson at Monticello. In exchange, Jefferson had his team of gardeners and builders aid in the design of Mazzei’s estate.

The cultivation of wine soon took a backseat to the impending American Revolution. Mazzei, unable to toll the liberty bell in his own country, became an ardent supporter of American independence. So much so that Mazzei is widely recognized as a Founding Father in his own right. In 1980, the U.S. Postal Service issued a 40-cent stamp to commemorate Mazzei’s 250th birthday and honor his early patriotism (using the anglicized name Philip Mazzei).

Mazzei began by speaking on behalf of Jefferson in Virginia churches, delivering speeches on religious freedom that had a profound impact on local congregations. For the Virginia Gazette, under the penname “Furioso,” he wrote intellectual and philosophical essays in favor of the separation of church and state, the equality of human beings, and the absolute necessity of breaking from British rule. Jefferson, who translated the pieces, remains the only U.S. president to ever speak and read Italian fluently.

Many of Mazzei’s enlightened ideas were incorporated into important texts and documents of the day. The “All men are created equal” line in the Declaration of Independence can be traced back to a Mazzei article also translated by Jefferson. “All men are by nature equally free and independent,” wrote Mazzei. “This equality is necessary in order to create a free government. All men must be equal to each other in natural rights.”

In a 1958 article expanded into the 1964 book “A Nation of Immigrants,” published a year after his assassination, John F. Kennedy was convinced that Jefferson, though the Declaration of Independence’s lead author, was in fact paraphrasing Mazzei. “This phrase appears in Italian in Mazzei’s own hand, written in Italian, several years prior to the writing of the Declaration of Independence,” wrote Kennedy. “Mazzei and Jefferson often exchanged ideas about true liberty and freedom. No one man can take credit for the ideals of American democracy.”

Letters Mazzei wrote to powerful friends in France were instrumental in securing French assistance for the Colonies, as well as support from French allies including The Netherlands and Spain. Between 1778 and 1784, Mazzei, by now a naturalized Virginia citizen, worked as an agent for Virginia abroad. At the behest of Jefferson, by then governor, Mazzei borrowed money, purchased weapons, and foraged for political and military intelligence, primarily from the Grand Duke of Tuscany.

Despite Mazzei’s tireless devotion, he failed to secure a consular post in Virginia and returned to Europe permanently in 1785. He remained a relentless advocate for the U.S. abroad, translating Jefferson’s speeches and writings. In 1788, writing in French, he published the first history of the American Revolution in French (translated as “Historical and Political Enquiries Concerning the United States of North America”). The four-volume tome was heralded as a fact-based counter to British propaganda.

Mazzei and Jefferson maintained a vigorous correspondence. One infamous letter sent by Jefferson to Mazzei in April 1796 touched off a scandal that would plague Jefferson for the rest of his political career. Mazzei, for reasons unknown, copied out the letter to at least two friends, and its text appeared print. Known as the “Mazzei letter,” it represented an attack on the ruling Federalist Party, with Jefferson accusing its leadership of corruption and complicity with the English government. The missive soured relations between Jefferson and Washington.

But Jefferson never reprimanded Mazzei. He instead kept in regular touch with his old friend. “An intimacy of 40 years had proved to me his great worth,” wrote Jefferson after hearing of Mazzei’s death in Pisa in March 1816. He was a man, added Jefferson, whose “early and zealous cooperation” played a key role in American independence.