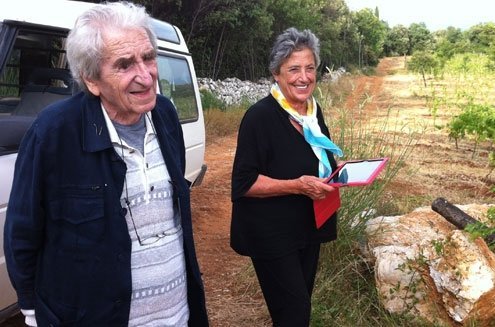 tanding on a hill outside San Gimignano in Tuscany 300 meters above sea level and 70 kilometers inland, I didn’t expect to be picking up seashells. They looked like they had just washed up on the beach, but they were 70 million year old fossils.

I recently visited three prizewinning artisan producers all of whom make Vernaccia di San Gimignano DOCG from organic vernaccia grapes grown in this ancient soil. They use traditional methods and don’t add chardonnay (as many producers do) in an effort to appeal to international palates.

Despite their similarities, each producer had a distinct philosophy and personality. My time in those hill generated thoughts about wine, and the people behind them.

A Rome native who pursued classical studies at university, she bought 24 hectares (60 acres) of land in San Gimignano in 1965, moved there with her companion, Sergio d’Asej, a poet and school teacher, and began her wine operation from scratch.

Her vineyards and winemaking processes were all organic, long before it was fashionable. She is literally what the Italians call una forza della natura, a force of nature, a woman filled with joy, intelligence and energy. I would swear she was 30, but her wisdom belies it.

One evening near sunset, she and Sergio took me through the vernaccia vineyards and then to the “Triassic vineyard” where she grows red wine grapes. The vineyard sits at 450 meters, an “island” in large woods that has been certified as the oldest identifiable Triassic soil in Italy (during most of the Triassic period, 250-to-200 million years ago, the globe was dominated by the supercontinent Panagea). The local soil was red and filled with giant rocks that seen today might have resembled modern art sculptures.

For a while, we stood and listened to the silence. Elisabetta later told me she’d created a foundation to renovate old houses on “the island” where young children and the elderly in need will be able to come for retreats.

Elisabetta makes three versions of pure Vernaccia di San Gimignano DOCG. The second two are made from “free-run must” meaning that the juice of the grapes flows out because the skins break naturally from the pressure of the grapes above. Here are the wines, in pricing order:

— La Mormorai: Mattia Barzaghi: Mattia Barzaghi, a Bergamo native, studied at the Politecnico in Milan before turning to Tuscany and winemaking. He apprenticed for years with a top producer of Vernaccia. He then rented 45-year-old vineyards from a neighbor, transformed them using all organic methods, and found a cellar in which he could make his own wine.

Mattia has been influenced by the Alto Adige style of winemaking; in his words he makes “vertical” wine (i.e. a frank and clean expression of the specific land and the specific grape). His first vintages were in a series called “zeta” or “Z” that he’s since changed to “reZet,” recalling the word “reset.”

Like Elisabetta, his vineyards are old, 300 meters above sea level, and rooted in fossil filled sandy soil. But he insists there’s a difference. “My wine,” says Mattia, “is masculine and hers [Elisabetta’s] is feminine.” His wines do have more salinity and minerality giving them a sharper, cleaner flavor, not better or worse but decidedly different. Like Elisabetta, he has several wines.

— Podere La Castellacia: Alessandro Tofanari and Simona Orsini Alessandro Tofanari, a Florence native, had a long-time dream of living off the land. He looked endlessly for a property suitable for vineyards. He eventually found 54 hectares that he considered perfect, but then had to wait a decade until the owner of the property finally relented and agreed to sell. His focus and persistence is reflected in every aspect of the wine Alessandro makes along with his wife Simona, whom he married just weeks before the first harvest in 2003.

“Castellacia” means ruined castle, which is exactly what he found when he arrived at the property. He has since renovated and added on to the old buildings (with foundations dating back to the ninth century) and planted all the vineyards himself. Though the vineyards are young, there’s a long history of grape growing on the land. Near one of his vineyards, Alessandro pointed out 100-year old vines planted by local county-dwellers or contadini — the Italian word for peasants — using the Etruscan method of attaching the vines to tree branches.

Like the other two producers, Alessandro’s vines are planted in the same sandy, fossil-filled soil. But the terrain is slightly different from the others. For one thing it’s lower, 250 meters, with the vineyards facing west, and with a river running through a deep gorge at the base of the property. The water flow has a significant effects on the day and night temperatures. Of the three, his wines are the lightest and most acidic with citrus fruit flavors as well as minerality.