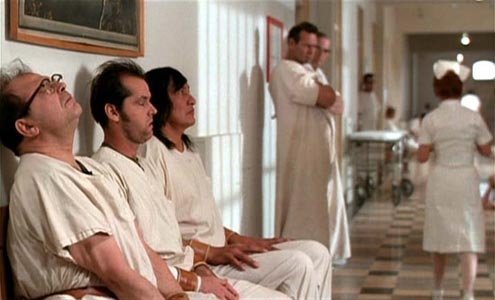 Scene from "One Flew Over the Cuckoo's Nest": Who's the doctor?
M

y job often finds me waiting patiently for a chance to talk to doctors. In Italy we’re called “drug information scientists,” which in the United States translates to drug reps. For the past few years I’ve been dealing mostly with psychiatrists. Though I like my job, there’s a lot of waiting. The upside is meeting all kinds of people and occasionally establishing relationships that extend beyond the workplace. The other upside is getting to listen in to what people say.

Try sitting in an Italian waiting room for hours. Women will often argue over favorite recipes and claim to know the best food store in Rome. Sometimes I take notes inconspicuously. You never know.

When food isn’t the subject, it’s love and betrayal. Years of waiting rooms have led me to decide that Italy’s only real problems concern food and sex. Those of you thinking inflation, GDP, or rising unemployment, take a seat.

Then come the strange encounters. I recently visited a psychiatric clinic to meet the attending physician. Once inside, I asked a nurse where to find him. As often happens in Rome, she didn’t say a word but pointed instead to two men standing in a corner. One wore a doctor’s white coat with a stethoscope; the other had on a chic dark sweater with a ponytail and a beard. I naturally approached the guy with the coat, introduced myself, and began to talk about the clinical trials of my drug, and so on.

The doctor immediately seemed interested and let me keep talking. I remember feeling good about my pitch. Too bad he wasn’t a doctor but a psychotic posing as a psychiatrist as part of his illness. The doctor was the ponytail man (of course). He listened to the exchange and finally apologized. He also said he hadn’t had so much fun in years.

Another time, a doctor told me about a patient who was guided by an imaginary voice. Thanks to intensive psychotherapy and medication, the patient had gradually become something like the Russell Crowe character in “A Beautiful Mind.” Though no John Nash, he’d at least become aware that the voice was a hallucination. But what drove the patient crazy was something else: He was a big supporter of the AS Roma soccer team and the voice in his head kept screaming “Forza Lazio!”

Since Roma and Lazio fans are in a state of constant war (think Yankees and Red Sox), the exasperated patient finally begged his doctor for help. “I understand that the person I keep hearing is just a figment of my imagination, but could you at least make him a Roma fan?”

Football in Italy is a real disease.

My days are filled with twists and turns. Take the first snow day, February 3. Never mind that every newscast warned of uncommonly harsh weather, including snow, the day still turned into a nightmare. It didn’t matter that I was among the lucky ones with snow tires. I was stuck on the Rome ring road for four hours. Panicked Rome workers had hysterically jumped into cars and headed home early, most of them unequipped to deal with increasingly heavy snowfall. Some drivers dead-stopped on the highway to try to put on makeshift chains. Fender-benders became a constant. A truck jackknifed and completely shut one down lane. I felt like I was on the set of an action movie.

Rome last got heavy snow 26 years ago and no one was ready, least of all the mayor. No salt, no plows, nothing. Good luck, fair city, you’re on your own.

But the strangest thing I saw that Friday wasn’t on the highways but in a supermarket. Panic buying made it seem like Rome just after World War II. I saw two people argue over a last loaf of bread (bread and milk went first). The cashier told me people were picking up things they’d never normally eat. His eyes darted to a cart filled with carrot curls.

With the supermarket sacked, I decided to go home and work from simple ingredients, polenta with sausage sauce. Call it my nuclear apocalypse meal.

Polenta with sausage and tomatoes (serves 4)

— Strip the sausages. Cut into strips and pan fry for 5-6 minutes to eliminate some of the fat.

— In a saucepan, heat two tablespoons of olive oil and flavor with chopped onion, carrot, and celery. Fry, then add a dash of white wine. Let the wine evaporate. Add the chopped tomatoes, salt, pepper, and cook for 20 minutes or more. Add the sausage and continue cooking until the sauce thickens.

— Prepare the instant polenta by first pouring water in a stovetop pot. When it’s lukewarm, pour in the flour and salt. Continue to cook over medium heat until it boils. When all begins to boil, reduce heat to low and continue to stir so that the polenta doesn’t get lumpy.

— When the polenta has absorbed all the water, turn off the heat and leave the lid on for 10 minutes.

I recommend a full-bodied red wine. You might try a Sicilian Shymer (the brand name is Baglio di Pianetto), or a good Amarone della Valpolicella.