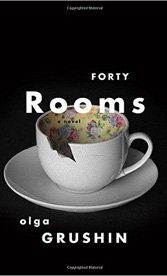 In the 1998 romantic comedy “Sliding Doors,” the shape of a young woman’s destiny depends on whether she can make it onto a London subway platform before the doors close. The age-old and game-changing conceit is at the core of Olga Grushin’s latest (and semi-autobiographical) novel, the girlhood-to-middle age story of a Russian woman whose American Dream marriage (and six children) can’t deny the lingering presence of creative what-ifs. Soon-to-be Mrs. Paul Caldwell grew up in Russia revering her father and dreaming writing poetry. But enrolled at a southern state American college (Grushin went to Emory), trains come and go. Upscale suburbia replaces the pursuit of art, triggering a novel-long examination of female fulfillment. The anti Mrs. Paul Caldwell is Olga, the narrator’s childhood friend, who rebuffs conformity to become a successful writer and globetrotter. Though Olga plays no direct role in the novel, she’s its missed train motif.

Grushin is a deeply deft writer whose mesmerizing first novel, “The Dream Life of Sukhanov” (2005) gave the late Soviet-era huge life by plunging into the troubled of a successful but troubled bureaucrat. But this lonely pilgrim’s progress, though strafed by Russian melancholia, struggles to get past its own framework, the 40 rooms a lifetime allegedly comes to furnish.

Once the narrator burns her poems and chooses minivans and maids — teasing out a baby each time a martial crisis arises — the story rotates around the pros and cons of “bourgeois rot” — why, the narrator wonders, did she “trade her home, her language, her ageing parents, for the land of walk-in closets and golden faucets?” She prosecutes herself only to retract the charges, rationalizes motherhood only to think twice. Rarely in this lifelong passage do mother, father, husband, children, ex-boyfriend and fringe figures come fully to life. It’s all about being Mrs. Paul Caldwell — Good choice? Bad choice? Or is choice itself illusory? What if she’d eloped with an early lover, now a composer? Why, well into middle age, must she listen to the admonishments of an old housekeeper who while giving notice damns her for frittering away a lifetime — “… the more things you have… the faster your time runs through your fingers.”?

The Americanization of Mrs. Paul Caldwell, Martinis included, is a quiet but potent indictment of a certain kind of upper middle class life, but with (too much) a bit too much subconscious meditation to extend the rail tracks. A woman can make kids and run a household, but what about the poems reverberating in her head? They go nowhere, and the result is that their lines are still eager to become chapter and verse.