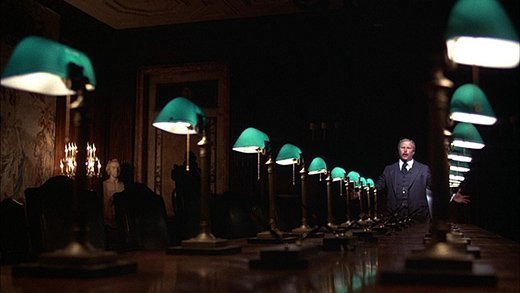 Ned Beatty as Arthur Jensen in "Network."
A

t the height of post-Nixon era disenchantment about politics, politicians and America’s seemingly broken moral and financial order, the screenwriter and playwright Paddy Chayefsky produced a darkly comic fable about the inherent perils of the TV age. In it, an aging, alcoholic network anchorman, no longer popular in the nightly news ratings, decides to tell viewers he’s been canned, but that in his final broadcast, he’ll kill himself while on air— in living color.

His ratings soar and he’s transformed into a soothsaying celebrity.

To say Chayefsky was ahead of his time understates the case. “Network,” the 1976 film version of his story, starring Peter Finch, William Holden and Faye Dunaway, won accolades by the bunches. Finch, who portrayed the anchor Howard Beal, “the mad prophet of the airwaves,” won best actor at the Oscars (though he died before he could accept it).

Lost in the shuffle of praise — and Beal’s memorable line, “I’m mad as hell and I’m not going to take it any more”” —was the script’s lynchpin moment, in which the head of the network, known as IBS, enters a gilded Manhattan conference room to give impressionable broadcaster Beal his assessment of how the world really works. That astonishing soliloquy, like none other in film history, is worth total recall, since it captures — in the fact is stranger than fiction spirit —aspects of the new compass whose strange quivers drive the caricature-friendly Trump presidency.

IBS chairman Arthur Jensen, played by Ned Beatty, is in general a fan of Beal’s lucrative ranting. He intervenes directly only when Beal begins proselytizing about the perils of television, middle class sloth, and corporate greed. But his harping on the latter puts in jeopardy a deal between IBS’s parent company and a vast Saudi Arabian conglomerate (oil prices were, and remain, a hot topic).

Enter the Teddy Roosevelt-like Jensen, an omniscient figure for the ages.

His oracular rant —at once both sanctimonious and cajoling —begins after he fastidiously closes the opulent room’s shades, leaving a long boardroom table illuminated as if a mahogany crypt. You can of course find the whole of the scene on the web, but set that aside for a moment. Instead, imagine the setting and context, shut your eyes, and read attentively as Chayefsky presages a Trump-bound future.

Arthur Jensen: You have meddled with the primal forces of nature, Mr. Beal, and I won’t have it! Is that clear? You think you’ve merely stopped a business deal. That is not the case! The Arabs have taken billions of dollars out of this country, and now they must put it back! It is ebb and flow, tidal gravity! It is ecological balance! You are an old man who thinks in terms of nations and peoples. There are no nations. There are no peoples. There are no Russians. There are no Arabs. There are no third worlds. There is no West. There is only one holistic system of systems, one vast and immane, interwoven, interacting, multivariate, multinational dominion of dollars. Petro-dollars, electro-dollars, multi-dollars, Reichsmark, rins, rubles, pounds, and shekels. It is the international system of currency which determines the totality of life on this planet. That is the natural order of things today. That is the atomic and subatomic and galactic structure of things today! And YOU have meddled with the primal forces of nature, and YOU… WILL… ATONE! Am I getting through to you, Mr. Beal? You get up on your little twenty-one-inch screen and howl about America and democracy. There is no America. There is no democracy. There is only IBM, and ITT, and AT&T, and DuPont, Dow, Union Carbide, and Exxon. Those are the nations of the world today. What do you think the Russians talk about in their councils of state, Karl Marx? They get out their linear programming charts, statistical decision theories, minimax solutions, and compute the price-cost probabilities of their transactions and investments, just like we do. We no longer live in a world of nations and ideologies, Mr. Beal. The world is a college of corporations, inexorably determined by the immutable bylaws of business. The world is a business, Mr. Beal. It has been since man crawled out of the slime. And our children will live, Mr. Beal, to see that… perfect world… in which there’s no war or famine, oppression or brutality. One vast and ecumenical holding company, for whom all men will work to serve a common profit, in which all men will hold a share of stock. All necessities provided, all anxieties tranquilized, all boredom amused. And I have chosen you, Mr. Beal, to preach this evangel.

Howard Beal: Why me?

Arthur Jensen: Because you’re on television, dummy. Sixty million people watch you every night of the week, Monday through Friday.

Howard Beal: I have seen the face of God.

Arthur Jensen: You just might be right, Mr. Beal.