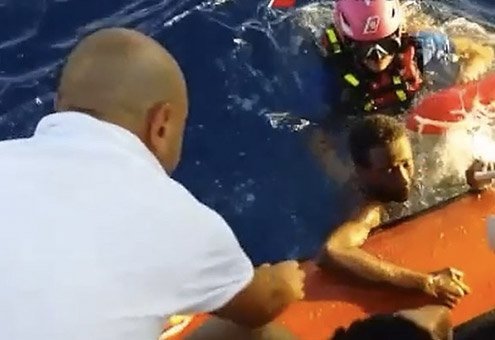 et’s be clear: Italy is not a Statue of Liberty nation. When wretched refuse flee teeming shores to cross the risky Mediterranean there is no Emma Lazarus waiting in the wings with happy endings or epitaphs. There is only stormy water.

The Italian peninsula was for centuries composed of city-states often at war with each other and sometimes overrun by European rivals. Linguistic and cultural provincialism “own-ness” served as both barrier and defense mechanism. Local doors were closed to all that was seen as mongrel, since closing unites. The menacing Catholic-Muslim religious divide — after Rome’s various vandal sackings —transformed Africa and Asia into menacing entities, with papal Italy wanting no part of Spain’s legacy, half-run by Moors for eight centuries.

Benito Mussolini’s invasion of Ethiopia and Somalia a millennia later merely firmed up long-held notions of Aryan-Italian superiority — and the Italian colonial experience, unlike that of England and France, didn’t endure long enough to produce meaningful social exchanges (leading to newspaper sketches of conquered “darkies. “)

Postwar Italy was in turn so absorbed its own north-south, rich-poor rift, a massive class war with an ethnic dimension, that the idea actual outsiders might one day arrive, let alone ones with black faces, was literally inconceivable. That was true until a few decades ago.

Italy’s closed-faucet approach, in particular that of its insular north, has put the country at an extreme disadvantage in dealing with the recent immigrant influx, which began in earnest after the fall of the Berlin Wall and increased in density when the economy of former colony Albania collapsed in the early 1990s. Soon after, the Eastern European corridor widened to include Latin language-speaking Romania as well as African and Asian spillage (headed by Morocco and Bangladesh, respectively). Underground railway chiefs peddled Italy as a perfect jump-off point for those seeking entry into Europe.

The new Italian arrivals — at times resisted and often insulted, at least at first —soon filled in crucial labor voids. The “huddled masses,” some of them skilled, followed a global pattern by doing menial work that more entitled locals spurned. Except that Italy largely refused to officially acknowledge its replacement parts, fearing they might acquire status. In that sense, Italy lacked the absorbing mechanisms that more veteran and confident colonial states had put into play decades if not centuries before (Spain, Portugal, France, Germany, Holland, England and Belgium all had deep African and Asian ties).

Poorly equipped and subliminally resistant even now, Italy has instead evolved into a maladjusted but fundamental Mediterranean halfway house for Africans and Asians headed north, many forced to take circuitously tormented routes. The Italian passage is a time bomb for overloaded ships, and most are. The situation was admittedly only slightly better in the 1990s, when barge-loads of equally imperiled Albanians toiled across the Adriatic. Only the distance was less daunting (and the overall situation mitigated in that most Albanians spoke basic Italian).

But immigrant sea traffic jumped in 2011, as civil strife grew in Somalia, Egypt, Tunisia, and Syria, with Libya plunging into little-publicized chaos. Exile numbers grew into the thousands monthly, some turned away, others landing on obscure coasts, a few drowning unmentioned.

Italian legislation hasn’t helped, fumbling with guidelines that would put new arrivals on more equal social footing while at the same time attempting to discourage those who would make the journey — even though “sea walls” and detention islands are a fool’s errand. Those willing to pay for rickety boats and slave ship-like conditions are well past any point of no return, which disaster and drowning shows time and again.

Yet Italy, still sensitive to skin color, still resists contemporary realities, including recent data that suggests eight percent of the legal population is foreign, with the illegal number pushing the number over 10 percent. North Africans tend to fit in better than those from further south. The country’s new immigration minister, a black woman born in the Congo, has faced a stream of insults since her appointment in April, and racial violence, while marginalized in mass media, frays the fringes of many Italian cities, particularly in the immigrant-heavy north.

Though Italy is cherished by many of its new arrivals, or perhaps because it is cherished, the country’s middle class, only in its second generation, is insecure and defensive about a future it can only imagine as worse than the present, that concern expressed in terms of a lively pessimism that conceals a more seditious side, namely wanting only the known, and therefore more of the same, unaffected by changes in skin color.

Christian but stubborn, terrified of change in a way no other Western nation can know let alone fathom, Italy’s approach to the complications and responsibilities of being a multi-ethnic state — including accountability for its own racial sensitivity — calls to mind Groucho Marx’s self-deprecatory view of inclusion: “I don’t care to belong to any club that will have me as a member.”

If only Italy weren’t well past the tongue-in-cheek phase.