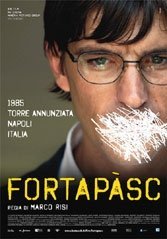 Unlike many recent Italian productions about the reach of the underworld, Risi’s stripped down effort reeks of Naples’ corrugated tin. Jagged, Spartan, free of undue musical swells and pushy camera tricks, it’s the story of journalist Giancarlo Siani (Libero De Rienzo), who in the mid-1980s got to the real reason behind a bloody Camorra feud in the notoriously criminal Torre Anunziata section of Naples. At the time, the city was awash in building contracts following a 1980 earthquake. Told to investigate but to limit his zeal, the young and fresh-faced freelancer for the daily Il Mattino instead stumbles onto a system of rigged contracts and bribes. The gangs fight it out while local authorities, powerless beneficiaries of mob clout, wink at the violence.

When Siani begins probing the Camorra-influenced mayor’s office and prosecutors, a very Italian event occurs: He’s promoted from his Torre Annunziata beat to become a fulltime reporter at the main office. It’s manipulated merit. “There are dogs and there are their owners,” says his patronizing editor, “which do you want to be?” The editor wants a dog, but Siani can’t stop digging. He drives through the city in beat-up yellow Citroën getting interviews who outcome amaze him but make film’s outcome painfully predictable.

But Risi (“Muro di Gomma”) is never maudlin or trivial. Instead, he’s made a simple, dignified and unpretentious movie about the perils of knowing too much in a city where crime bosses are lords of the manor. The title means “Fort Apache,” title of the John Ford film, in Neapolitan dialect.