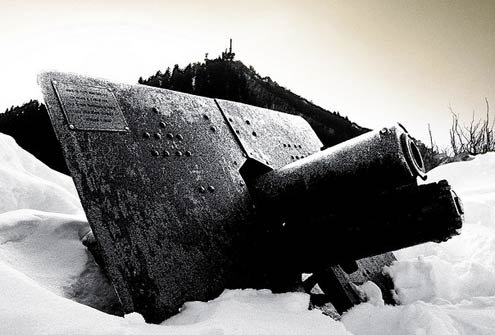 The Linea Cadorna (Cadorna Line) ran along the border between Italy and Switzerland.
T

he upper reaches of Monte Tremezzo afford a sweeping view of Lake Como and the Italian and Swiss Alps. The mountain rises between Monte Galbigo and Monte Crocione in Lombardy Region near Lake Lugano and the Swiss border. The three mountains are so well-positioned that World War I Italian General Luigi Cadorna decided to build a strategic network of defenses, including trenches and shelters, along their crests. The anti-Austrian fortifications came to be known as the Linea Cadorna and those on Monte Tremezzo remain in good condition today.

This bright, frosty Saturday in November, Marino and I are hiking from Alpe Colonno (1,322-meters) to Monte Tremezzo (1,700-meters). We’ll walk back the same way, trekking a total of 17 kilometers over five-to-six hours. The gentle ups-and-downs of the track add up to a 600-700-meter climb. Though long, it’s an easy route to the Linea Cadorna on a military road built in 1916 during what was called the Great War.

To get there from Milan, we’ve driven to Como and then taken SS340 to Argegno where we turned onto the Intelvi Valley’s SP Road 13 and followed signs for San Fedele Intelvi and then Pigra. After passing Pigra, signs on the military road warn of risky driving ahead. Today it’s icy so we leave our car at Alpe Colonno, in a large parking lot at the lone bar-trattoria-farm. In better weather conditions, it’s possible to drive all the way to Rifugio Venini, a mountain hostel and restaurant near Monte Tremezzo’s peak.

As we start down the asphalt road at Alpe Colonno, a fluffy ginger cat greets us.

“Ruffiano!” (“little ruffian”) exclaims my husband Marino, petting him. “No one else up yet to feed you?”

Ginger follows to a stand of trees. Here, the smell of spruce permeates the air. Pheasant calls and distant shots ring out.

We round a corner and descend. The road is slippery with black ice. The fields are burnt amber by frost. In 30 minutes we reach Rifugio Boffalora (1,252-meters), a popular summer destination (tel. +39.0344.56486). A sign announces that Boffalora is closed until Easter, but another nearby sign indicates that Rifugio Venini, four kilometers away, is open.

The road ascends as we walk to Alpe Ossuccio, a hamlet of stone cottages and meadows where cheese is made in summer. “Alpe” means pasture and in this area their names refer to towns on the lake — Colonno, Ossuccio, Lenno — whose residents traditionally plowed the fields.

We hike for about an hour. The trees grow sparse and the rolling land becomes open and windswept. In the distance the road slashes higher and higher into the side of the winter-barren mountains.

At Alpe Lenno (1,496-meters), we walk into the yard of the lone building. The view is breathtaking. Massive Monte Rosa and the unmistakable peak of the Matterhorn stand out among rows of snow-capped mountains gleaming against an azure sky. Below, mist partially veils Lake Lugano and the town of Porlezza.

Back on the road, we walk in sunshine under Monte Galbiga’s crest while thick layers of cloud obscure everything below. It’s like a view from an airplane. We meet a hunter resting on a stone wall.

“Hard to believe Lake Como is right below,” Marino says.

“But it is,” the hunter answers. On a clear day — that’s about once a year — you can even see the gold Madonna of Milan’s cathedral.”

Stone walls, trenches and sentry posts are hunkered into Monte Tremezzo’s side. It’s well-preserved but much has been lost. A sign explains that work on the Linea Cadorna began in 1899 but that theCeresio-Lariana sector was erected during the war itself to protect against an Austrian-Hungarian assault through neutral Switzerland. Had that happened, it would have opened a second front and possibly surrounded Italian and Allied troops fighting in the Stelvio Dolomite Mountains.

There was no fighting here. I’m surprised how shallow the trenches are. I imagine my boots tracing the steps of a young soldier, a baby-faced boy shivering on a cold and windy watch. Was he later sent to the front only to die like the soldier whose body was discovered frozen in a glacier a few years ago?

After exploring, we take the path behind the fortifications directly up to Monte Tremezzo’s summit. A modern Madonna sculpture and platform at the top are visible.

On the crest, we pause to eat. The clouds clear and Lake Como appears in the mist 1,500 meters beneath us. Bellagio sits on the Larian Triangle’s humped tip that emerges from the lake like a benevolent sea monster. We identify the towns on the west side — Varenna, Bellano and Dervio; and the mountains — Legnoncino, Grigna and the twin peaks of Corni di Canzo. Hikers and goats on neighboring Crocione Mountain appear like tiny specks. Ranges of Italian and Swiss Alps ripple into the horizon.

As we descend on the same route, the frozen pastures cut by the road are starkly beautiful. Families of trekkers bundled against the cold pass us as they walk to Rifugio Venini for lunch.

At Alpe Colonno the ginger cat warmly welcomes us back.