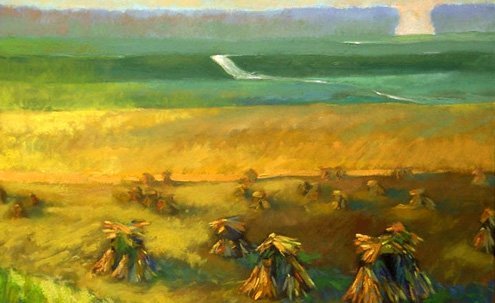 Western Ohio, by Richard Clem.
I

Why, I wondered, had I put all this behind me?

I walked away from home at 18. I was different, I thought then. No one could understand how much I wanted out of Dodge. No more big family house. No more home cooked meals. Pent up and pensive, I wanted out of my skin. The pretend-happy daughter wasn’t happy at all. I longed for a larger world. When I slipped out of Ohio, I hoped no one would notice.

According to the 1990 U.S. Census statistics, 60 percent of American children leave their parents by age 24. In Italy it’s five percent, Spain six, Germany 40. Facts are facts: Americans leave home. Stay at home past age 25 and you expose yourself to ridicule. You can be a pansy, a sissy, or worse: a failure.

No one told me how normal I was. No one told me the cooped up feeling was a sign it was time to go. So I felt guilty. Guilty that cornfields and ever-growing strip malls weren’t enough.

When the time came I took the archetypical backpack trip — England and Wales; Netherlands and France; Germany, Austria and Luxemburg. When I returned from Europe I lived in San Francisco, Seattle, and Southern California. I finally settled in New York City.

Some 40 million Americans moved between 2005-2006. No other population is so mobile.

Meanwhile, my parents still live in my childhood Ohio house. Most of my 12 brothers and sisters live nearby. It’s a nice place to raise a family, which why I was back for my weekend trip: a new baby, a high school graduation, several birthdays, and a one-year marriage anniversary.

Time can seem to stand still when you go home.

My mother held my hand and pointed to orange poppies growing near the front porch. She pointed to the “knock-out” roses draped in buds. The peonies were behind the garage, round-headed and ready to bloom.

In the back yard, my father looked up at a tree filled with tiny flowers and remarked that he might get pears this year. He bemoaned a deer that had eaten the bark off his new cherry tree. “Look,” he said, and he took me to the stump. My mother approached and pulled out five bright red radishes. “We’ll have these for lunch,” she said proudly.

Lunch with the family.

I don’t have children or home additions on my life resume. When I was asked about my life in New York I thought to mention the Olaf Eliasson exhibit at the Museum of Modern Art. But I thought the better of it. I spoke little. I listened vaguely until old feelings crept in. I recognized them. The odd boredom, the sense of being cooped up, the guilt.

It was that time.

Hugs all around, “great to see you’s” exchanged, I hit the road. For a second I thought of saying, “You can never go home again.” But that’s not true. You can. Again and again. But too often you’ll find only what made you leave.