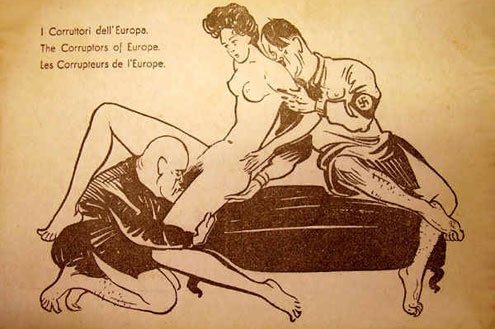 ar has always been the world’s greatest aphrodisiac. Remove it and what remains are sequences of intense arousal: bombs thwarted, hung elections, ash clouds, markets tumbling, a nation in economic chaos with others at risk of contagion, a titillating word by itself.

Freud and D.H. Lawrence, two among many, sexualized early modernism. One used science, the other literature. Both considered primal urges — whether generated by love or delusion — as generators of the irrationality that excited the world toward abandon. Crisis was a form of stimulation and confrontation a means to climax. Tanks followed logically, shattering romantic ideals.

Though more controlled, the 21st century still accentuates its predecessor’s dependence on conflict and release. With big power brawls seemingly out of the question, the woes of the many are spooned into a general apprehension based on a collective willingness to accept uneasiness as a feature of modern being.

The world’s tense foreplay gets its libido from bullies, terrorists, natural disasters, an ironic celebration of bad tidings from which there is no relief except vigilance, which is stuffed with its own tragicomic gloom.

In a recent book review, the veteran essayist Gary Wills spoke almost off-the-cuff of “a time of peril” and “this scary time,” rarely qualifying either the peril or the fright. He is one of many. President Barack Obama called the recent New York City bomb threat “another sobering reminder of the times in which in we live,” shorthand for a mutually understood and accepted foreboding.

But the arguably deeper dilemma is the lack of any cathartic release from such simmering. Despite newfound recourse cyberspace rants, talk doesn’t relieve. The thrashing and trashing produces no ejaculation, no orgasm.

Referring to individuals, Freud once remarked that the only bad sex was no sex. At a social level, repeated coital arousal without resolution inevitably generates anxiety and narcissistic depression, war’s unstable surrogates.

It also leads inevitably to Yellow Journalism and sensationalism. The arousal once pledged to parades, flags, troops and battle is instead split-screened to many events at once, interrupting one with another. The result is that none is completed or resolved. As a result, the literal twitter can’t stop itself, and means become ends.

“What-if” scenarios only inflate excitement. Coverage of the Times Square car-bomb plot unabashedly fantasized the carnage and its toll, excitement through dread and imagined regret. While 20th century wartime propaganda manipulated sexual caricatures to sow doubt, 21st century television delivers information through fetish and caricature. Everything is on the brink of an irrational something.

This month, Greece is the new 2008: What if Europe comes undone, and with it the global system? This lusty trepidation is still more coital borrowing destined to be interrupted, unresolved, or, worse still, sublimated.

Sublimation helps explain how a second world war followed in the wake of one so terrible that all the world’s leaders vowed to prevent another.

But bad economies gave excitement a pulpit. Primal hysteria dominated the 1930s, when the financial meltdowns were real, nations humiliated (beyond Greece’s wildest imaginings), with some people starving. This produced a lethal combination of decadence, hatred and nationalist passion, galvanizing demagogues, militias and generals. Keyed up citizens surrendered to chants. Cannons were built and final solutions schemed. Men in uniform were imagined as redeemers.

Though nationalism’s sexy door has since swung half-shut, crisis and menace remain as tempting as ever. Even stalwart citizens are part-time voyeurs in a lowbrow Weimar culture that considers vulgarity an affectation.

In a world of rules, satisfaction, both coital and national, is automatically filtered through consent and respect. But as loudly as civil compact rushes to exalt its standards, it still chafes at its own bit. Never mind Iraq and Afghanistan, wars that were righteously if dubiously ignited. Smart Yugoslavia blew itself to bits only 12 years ago and parts of Central Asia are rife with no-nonsense combat that spills from time to time into Moscow central.

Using the existence of “civil” global village as a guarantee against the revival of such temptation — war’s mood — doesn’t acknowledge how humans can tire of interruption, preferring the thrust of a sudden, destructive tryst to a norm that unconvincingly blunts irrationality and longing.

That prospect, more than any vague emphasis on a time of peril, is a sobering thought.