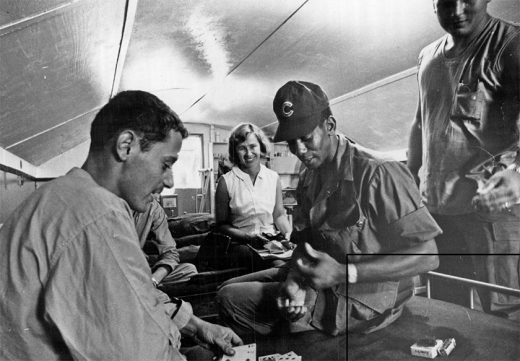 Foreign correspondent Georgie Anne Geyer (1935-2019) looks on as Chicago Cubs star Ernie Banks plays a hand of rummy with a wounded soldier on a 1968 visit to Vietnam.
A

s a college student, I wanted to be a foreign correspondent. Two weeks after graduation, I was on an overnight flight to Rome, unable to sleep with excitement, so I read the book, “Buying the Night Flight: Autobiography of a Woman Foreign Correspondent,” by Georgie Anne Geyer.

Geyer, who died in May 2019, was one of the few women correspondents of the postwar period, starting with the “Chicago Daily News” and later becoming a widely published syndicated columnist. She covered the Vietnam War, and the guerrilla wars in Latin America, and she interviewed leaders, including Fidel Castro and Saddam Hussein. Geyer and I shared an alma mater — Northwestern — and we both earned Fulbright scholarships.

Aspiring young reporters like myself spent a fair amount of time moonlighting alongside senior journalists.

When I got to Rome, I realized the market was saturated with veteran foreign correspondents. In the era when newspaper bureaus thrived, Rome, which also included the Vatican beat, was considered a plumb position. As a result, aspiring young reporters like myself spent a fair amount of time moonlighting alongside senior journalists.

I threaded my way into the field through the backdoor: my fluency in Italian made me an asset to experienced journalists whose one shortcoming was their inability to grasp the language. Gradually, I started writing articles, mining Italy for human interest stories, which it seemed to offer in abundance.

By the time I’d paid some journalistic dues — through internships, freelancing, “stringing,” and news assistantships — and finally had a real reporting job offer in hand, it was time for me to go back to America. “You’re leaving just when you can reap the rewards,” a friend told me.

A few years later, after graduate school and a science writing job, I wanted to get back into daily reporting. I found an interesting-sounding job in Gainesville, Florida, a city I’d never heard of. I applied, in part out of my own innate curiosity, a quality that had led me to journalism in the first place.

“Rome, New York, Washington, D.C.,” the editors read aloud on my resumé, during our first phone interview. “Are you sure you can live in Gainesville?” Though the city hosts the University of Florida, its population is less than 140,000.

“Sure, I’m sure,” I said confidently. “I love university towns. I’m from one.”

They flew me down, and I remember noticing the landscape of lush trees below. This must be what Vietnam looks like, I thought, not remembering the coincidental fact that Geyer had reported from that once war-torn country.

Florida wasn’t exactly my Vietnam, but it was my shot at foreign correspondence.

Florida wasn’t exactly my Vietnam, but it was my shot at foreign correspondence. I’d never been to the Deep South before, which the rural areas in North Central Florida are considered to be part of. Health disparities run deep. I met people in their fifties who’d never been to the dentist, and “people of the forest” who built fires for light, since they couldn’t afford electricity. I did plenty of run-of-the-mill research stories, and stories on snake bites, but I also covered executions and broke a story about the Confederate Flag — when the local government in the conservative county south of Gainesville decided to raise the flag after having lowered it like all the other counties in the southeast, following the 2015 Charleston Church Shooting. The gunman, who killed nine African-Americans, had endorsed the flag.

After two years of this kind of eyewitness reporting, I got a state reporting award and a more prestigious job in Washington, D.C. That job looked right on my resumé, but it felt wrong. I didn’t like desk reporting, or interviewing so-called talking heads. So I turned back around and returned to another reporting job in Florida, even as friends and colleagues cautioned me that I was committing career suicide. I had other reasons for my return, namely a budding romance, but I truly missed being in the field, talking to real people, coming up with ideas — learning a landscape that was more foreign than familiar.

It didn’t take long for me to get back what I had missed. As politics reporter in a conservative county, I was far from my comfort zone. My first assignment was to cover a luncheon meeting of the Republican Business Council. It was a fish fry, so I had a hushpuppy (deep fried cornmeal balls) for the first time. I flushed upon hearing collective booing whenever the names of then President Barack Obama or Hillary Clinton came up. 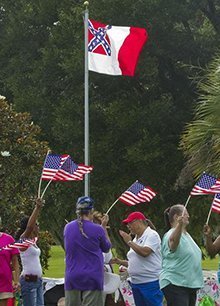 Not even a mass murder of African-Americans dissuaded some Floridians from rallying about their right to fly the Confederate flag.

When a nice woman introduced herself with the last name of “Doty,” I said, almost out of desperate excitement, “Oh, are you related to the poet?!” The poet being Mark Doty. She looked at me strangely. “Oh! I don’t know. I’ll have to ask my husband. It’s my married name.” Of course, people at that luncheon also wanted to know “what my husband did.”

I again dove into the job and had a good run of it. I unveiled sexism in the fire department, reported on an ongoing saga of a billionaire dairy farmer wreaking environmental havoc on local farmland, and went canoeing down rivers with environmentalists passionate about preserving the health of Florida’s waterways and wildlife.

When Donald Trump was elected president, I could answer my friends up North who wondered, “Where are the people who voted for him?” In my backyard. Literally. One street over from where I lived was the city’s fancy boulevard, with gated homes bearing Trump signs on the landscaped yards. Just a few miles away, down dead-end dirt roads were those same signs — often with “Beware Dog” signs as well.

Now that I teach journalism, I talk about my Florida “foreign correspondent” gig and how I grew from it, both as a reporter and as a person. The real lesson is the same one that my high school journalism teacher told our class, which has stuck with me all these years: if you want to be a journalist, he said, learn to be uncomfortable. My own spin might be: learn to be comfortable in uncomfortable situations.