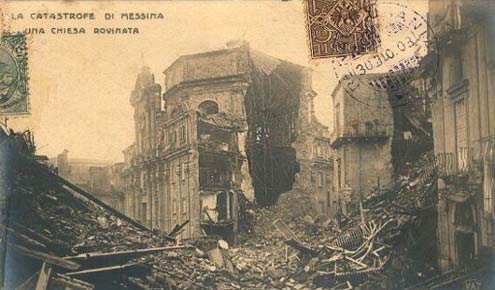 As the apartment’s resident fixer, I was expected to set the day straight by going painting-to-painting, restoring order. I was also charged with soothing the souls of neighbors eager to tell their stories. A drama queen with an operatic population, Rome wishes always to appear in harm’s way even when it’s not. Nor does it matter that devastation and death is very real elsewhere and nearby (poveri!). Rome is self-centered.

Walls, I was told when tremors hit the city, had “nearly” collapsed — never mind that the quakes in question were often two or three regions away. Paintings had “jumped.” Floors had “moved.” Chandeliers had swayed as if “on a boat in a storm.” Sometimes all the explosive ingredients were made to gang up: “When I looked up from my bed the walls seemed to shake and the chandelier swayed while the paintings moved and even the rug seemed to slip down the hall.”

This typical post-tremor description came via a family friend, an 85-year-old contessa, who lived for life-altering events. Certain that Rome was poised on the brink of an apocalypse that would see it slip into the sea, Atlantis-like, the contessa scanned newspapers for supporting clues.

Her irrationality owed a debt to both anecdotal and actual history. The Alban and Sabine ridges near Rome are of gurgling volcanic origin whose seismic indigestion had been known to cause Rome some trouble — and may yet again. In 1349, a Sabine quake cracked parts of the Coliseum.

The seabed off the coast of Tuscany and Lazio represents another stewpot of hiccups. Underwater quakes can transmit inland jolts. On Aug. 22, 2005 one such rattle (4.5 on the Richter Scale) unnerved the somnolent city. Ask a 100 Romans and they’ll tell you of a dozen more cases.

No, Rome isn’t southern California (or Sicily). No one fears a “Big One.” At the same time, seismologists, geologists and contessa-like seers agree that the so-called “Naples ring,” an imagined circle that extends concentrically around now-tame Mount Vesuvius, is vulnerable to shocking arousal.

Despite Vesuvius’ ongoing dormancy, Naples has a “Red Zone” a plan to evacuate the 600,000 people who live in the 70-odd towns and municipalities under the volcano. A Bronze Age eruption that long predates both Pompeii and Herculaneum and is known only as the Avellino event is believed to have incinerated the region and kept it lifeless for centuries.

The 1980 quake — Italy’s most visible for decades — decimated cities and villages in the regions of Campania and Basilicata, killing 2,570 people and leaving more than 30,000 homeless. Its epicenter was in Eboli, the town novelist Carlo Levi made synonymous with postwar destitution. Some blame the revival of the Naples underworld on post-quake society.

The bureaucratic exigencies of daily life and Latin laissez faire have slowed the progress of disaster planning (as they’ve also delayed the construction of “earthquake-proof” housing, not to mention the rebuilding of homes for those knocked out of them over the last 40 years.) Scientists are considered little more than costly alarmists until catastrophe proves them otherwise.

The L’Aquila quake is a case in point. Ten days before the April 6 quake, Giampaolo Giuliani, a researcher at the Gran Sasso Institute, noted a marked increase in radon gas, which the earth often “farts” ahead of tremors. He considered the radon density troubling enough to predict a major earthquake in short order. Moreover, the Abbruzzo region territory near L’Aquila had been rocked by dozens of tiny mini-quakes throughout February — the region sits atop the Apennine mountain fault. Civil defense authorities, worried about alarmism, quickly ostracized Giuliani’s remarks by referring to “idiots who get a kick out of spreading malicious rumors.” For his trouble, Giuliani was off by a week.

North to south, Italy has shaken for centuries. Unlike dull Vesuvius (which erupted last in 1944, following an Allied bombing run), Mounts Etna and Stromboli are volcanically boisterous. But their anger is usually focused south, and into the sea.

The December 1908 Messina, Sicily quake — which registered 7.5 on the Richter Scale — is considered the worst in modern European history. Asian-style tsunami rip-tides followed the original tremor and helped pushed the death toll to an estimated 180,000. Most of Messina itself was wiped out in 30 seconds.

Sicily was struck again along the Belice River in 1968, with hundreds killed and 70,000 left homeless (some notoriously dwelling in temporary housing for 30 years, when central government assistance bogged down). In May 1976, a tremor in Friuli, in the Italian northeast, killed 976 people and left 70,000 more homeless.

Seismic construction has faced opposition from those unwilling to leave older homes. More than two-thirds of Italy’s existing structures are more than 80 years old, a third more than 200. In L’Aquila, many building foundations date from the 13th and 14th centuries, though it’s unlikely more modern structures would have fully withstood the impact of the April 6 shocks.

Quakes are in Italy’s genes. Few know that 19th century Italian volcanologist Giuseppe Mercalli developed the first seismic measurement scale, which bore his name (Charles Richter’s version would supplant it). Mercalli’s 1-to-12 scale was adjusted for damage caused — “instrumental,” which meant measurable only by devices, to “catastrophic” — while Richter’s sought instead to measure the quake’s actual power.

“Italian” earthquakes or volcanic eruptions claimed half-a-million lives between 1600 and 1900, mostly in the central and southern part of the peninsula. There were also direct cultural effects. The Sicilian Baroque arose from the need to rebuild ruined churches destroyed by late 17th century tremors. The 1908 Messina quake led many Sicilians to head for New York.

Sicily is volatile ground. Catania vanished as a result of a Mount Etna eruption in 1693. Local clergyman Abbot Ferrara wrote it up larger than life: “The moon changed its color and one hour later a big foreshock occurred; it was announced by an underground rumble like a roaring thunder. The first day, the schism caused thousands of victims. The third day the phenomenon appeared in its most apocalyptic proportion. Some fractures opened in the soil, the sea withdrew and flowed back, while animals were shaken by the violence.”

Mercalli himself died months before the last massive central Italy quake, in January 1915, centered, like this one, near L’Aquila, in a town called Pescina. It lasted mere five seconds and registered as “very disastrous,” the top Mercalli measurement. Some 120,000 people died, most them in the nearby city of Avezzano. Aftershocks continued for months. But history refuted the idea of a unique event. Local ledgers chronicled major Abbruzzo earthquakes in 1348, 1450, 1458 and 1706 — to which 2009 can now be added.

In 2004, Italy’s National Institute of Geophysics and Volcanology (INGV) introduced an updated “map” of seismic vulnerably. The country contains a north-to-south fault line which essentially pits the underlying geology Europe and Africa against one another, with Africa seeking more space. The the Italian northeast, already victimized in 1976 faced the greatest risk. The Apennines near Avezzano, no surprise, constituted another peril. Massimo Cocco, who presented the study, admitted 60 percent of Italy sat atop a kind of seismic tug-of-war. The idea of a “map,” he said, was to stimulate regions to pay attention to new construction.

Asked about Rome’s risk, Cocco answered cautiously: “Let’s just say, for example, that the center of Rome can be damaged by modest quakes in the Alban Hills or much, much stronger ones from the Avezzano direction.” In essence, the city’s environs posed minor risks while major, more unpredictable ones lurked down-country, in Abbruzzo for example. There was no way of confidently predicting when a quake would jump the tracks, moving out of its seismic comfort zone.

Petrarch, in Rome for the Roman Catholic Church’s Jubilee Year of 1350, was caught by surprise, as were thousands of others, when a rare, powerful quake struck the city that year. “Rome was shaken by an unusual tremor, so seriously that its 2,000 year old foundations were rocked,” he wrote. “Old buildings neglected by people but admired by pilgrims collapsed. Towers cracked and magnificent busts fell mutilated to the ground. Many churches and above all of the one dedicated to Paul, the Lateran, was demolished, replacing the ardor of the Jubilee with horror and grieving.”

Four hundred years passed until the next significant earthquake in 1703, when 10 tremors were recorded over two days, lightly damaging the city center. Since then, Rome has remained largely quiet, with occasional spill-over producing requisite wailing.

Of the city’s adjoining towns and districts — Rome is the capital of the Lazio region — only one, Rieti, north and east of the metropolis, has been classified as susceptible to a major quake, based mostly on its proximity to the flashpoint Apennines.

Yet the L’Aquila tragedy did remind Rome residents of their country’s avidity for seismic rock’n’roll. Beds shimmied, buildings swayed (the ancient Carcalla Baths were mildly damaged) and frames did their queer tango. Though the lethal consequences lay elsewhere, forbidden foreboding had entered the room. The distance between Rome and breathtaking calamity, after all, was a mere 95 kilometers, far too close for any comfort to excuse.