For love of screwball 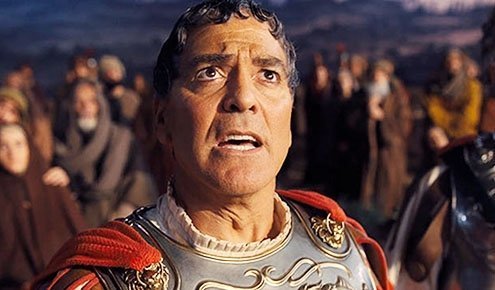 George Clooney as Bard Whitlock: a botched speech for the ages.
F

or all their masterful forays into dramatic filmmaking — early on with “Blood Simple,” later with “No Country for Old Men” — the Coen Brothers can’t resist the lure of the screwball for any length of time. The filmmaking life isn’t the same without a zany pothead (Jeff Bridges in “The Big Lebowski”) or a CIA analyst doing combat with hairdressers (John Malkovich in “Burn After Reading.”) Nor is it worth its weight without ample amounts of parody, as in “Raising Arizona” or “Fargo,” both of which deftly mixed deadpan hilarity with flat-out noir.

Which makes quibbling about the admittedly imperfect “Hail Caesar” a moot point. All things considered it’s a sweetly scatterbrained look at the Hollywood studio system of the Biblical Epic-producing 1950s, when Hollywood was run by the likes of Paramount and MGM and lubricated by fat-cat directors, spoiled stars, all this with the Commie scare squarely in the air.

The masterstroke here is casting Josh Brolin as Eddie Mannix, a conscience-abiding, poker-faced Catholic (“swell” is a favorite word) who actually takes his job as zookeeper of Capitol Studios seriously. Quoting narrator Michael Gambon, he’s the man who ensures “this year’s ration of dreams reaches the needy of the world.”

No easy task when you’re to out to make a Romans-and-Christ epic headed up by Bard Whitlock (George Clooney), a party-lover who can’t remember his lines and soon finds himself kidnapped by a ransom-seeking, can’t-shoot-straight Red cabal that includes the likes of (oppressed) Herbert Marcuse. Bewildered Bard is flattered.

Then there’s Hobie Doyle (delightful Alden Ehrenreich), a wrangler-cowboy who’s been lifted out of Zorro-like Westerns to star in effete director Laurence Laurentz’s (Ralph Fiennes) 18th-century costume drama, eliciting a predictable if charming culture clash between Hobie and Laurentz that hinges on the vicissitudes of inflection, a gift wranglers aren’t born with.

Scarlett Johanson gets an extended cameo as DeeAnna Moran, a wrong-side-of-the-tracks gold-digger stuck in mermaid roles. Her aquatic innocence ain’t innocent at all, at least not under the fins.

But that’s the point. Start to finish, this is the Coen brothers’ zany take on the kooky hypocrisies and charms of old-school cinema show biz. Some moments skip past comedy into poignant homage: an ensemble tap dance by sailors to a tune called “No Dames” brings back the Astaire-Kelly era in the best of ways. Mannix, meanwhile, is invited to stop “babysitting oddballs and misfits” and accept a cushy job with Lockheed, now happily into jets and H-bombs. His pangs about what to do never seem slightly fake.

No matter how much the Coens lean toward the absurd and the silly, they never fail to give you at least one character you can hang your hat on, and Brolin’s wonderful Mannix is that man. He gives a wooly plot a sense of purpose. When he calls he calls the studio’s Christ movie “a swell story,” he means it.

And if you ever swore by the Bible movies of the time (“Ben Hur,” “The 10 Commandments,” “Spartacus,” “King of Kings,” et al), Clooney (aka Charlton Heston) pulls off a botched-line scene for the ages, one that makes this fitful film’s collective shortcomings entirely worthwhile.