For love of pigs 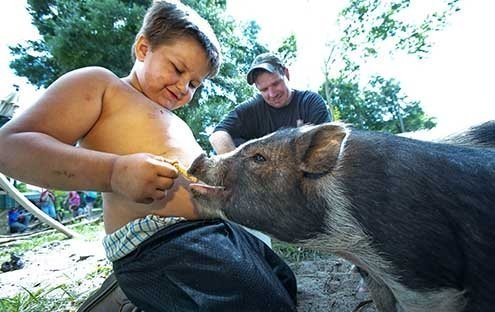 In one Florida farm, pigs were used to help the children of an autistic family. Photo reprinted courtesy of Doug Engle of the Ocala Star-Banner.
R

ecently a friend and his kids paid a visit to my house. It’s funny what kids pick up on. I have a two-bedroom 1940s Bungalow with a metal roof. It’s not exactly a cracker house, but it has character, and I’ve filled it with motifs of myself: pictures of Rome, poetry books, National Geographic magazines.

And then, there are my pigs. I have pig paraphernalia all over. I didn’t realize quite how much until the kids found my two plastic pigs (facing each other) that oink when squeezed, a stuffed pig on the kitchen window sill, a pig light on my key chain that also oinks when lit up, a stuffed Peppa pig for the baby on the way, pig storybooks, the perennial pig Christmas ornament from my aunt, pig slippers, and the pig footies I happened to be wearing.

I took inventory after they left, which is when it hit me: You can take the girl out of Iowa, but you can’t take the Iowa out of the girl.

I grew up in a pig-happy state. Iowa has the country’s highest pig population. Sadly, even for a lightweight vegetarian like me, most of the pigs have short, consumer-culture driven lives — another story entirely.

I was raised far from the pig farms, in a university town, but my fondness for pigs started early. I remember wanting a pet pig the way many little girls wanted a horse. I would eye our backyard, imagining a mini Wilbur grazing on the grass. My father cut short my daydreams: Pigs grow up and get big, he said.

I dropped the idea of ever having a pig until I moved to North Central Florida a few years ago. I took a reporting job covering Marion County — a big, rural county best known for its champion horse industry. Once on a reporting assignment, I did a double take when I saw a sign advertising pigs for sale. Excitedly, I took a picture, and then sent it to my companion, who quickly wrote back: “Don’t do it.” I wasn’t seriously considering getting a real pig, since I lived in town, where pigs were illegal, but I did know people in the countryside with pot-belly pigs, and being in such close proximity to pigs was enough to appease my pig-loving appetite.

One family in particular lived on the outskirts of town, in a trailer with patched-up windows and a muddy front yard that served as the pig pen. I went there on a reporting assignment, and regretfully wore white linen pants and strappy sandals that sunk into the ground. The pigs oinked and pooped. They were also, at least nominally, serving a purpose, as therapy pets for the family’s four autistic children. Their mother claimed only the pigs could calm her children down. The children poked at the pigs all they wanted, and the pigs just calmly took in their aggression, she explained. The pigs slept in bed with the kids, too.

I couldn’t help but raise an eyebrow at the mother’s explanation, but she polished it for the Marion County Commission when pleading her case to keep the pigs —which were technically illegal, since the family lived just within city limits. When the Commission voted to allow the family to hold on to the pigs, the room erupted in applause. That was, incidentally, the boldest decision I ever saw come out of the Commission, which was known for being sluggish and conservative.

Why pigs? The kids wanted to know. I didn’t have a good answer at the time. Now I do. It’s well-known that pigs are smart. They’re also cute and cuddly. They’re mostly sweet, unless you disrupt their feedings. I find them soulful, similar to the way many people find dogs soulful. I might not go so far as trusting a pig with my life, but I wouldn’t protest a pig companion. In fact, I may unconsciously look for the pig in people. I don’t mean that I look for gluttony (although I like people with a hearty appetite). And I certainly don’t mean the trite comparison between men and pigs. I like people who are smart, sensitive, reliable, and have an unpretentious zest for life. How pig are you?

My mother might have something to do with my pig obsession. Since her death, both big and small things about me seem attributable to her influence. She read me “Charlotte’s Web” when I was a child, and cried more than I did at the ending. It was one of her all-time favorite books, even as an adult, and she was a voracious reader.

Interestingly, her own death reminded me of the book. Hours after she passed at our home, I went out to the front porch swing with my earmarked copy of Emily Dickinson’s “Final Harvest.” I noticed a perfect spider web in suspense between the swing and the porch perimeter.

The rest of the family came out, one by one, to join me —slowly and sadly. No one said much, but you could feel the loss, and unity within the loss — like all the farm animals gathered to mourn the beloved Charlotte.

There wasn’t a spider in sight, but in the sunlight, the web shone like a silver thread.