For love of craft 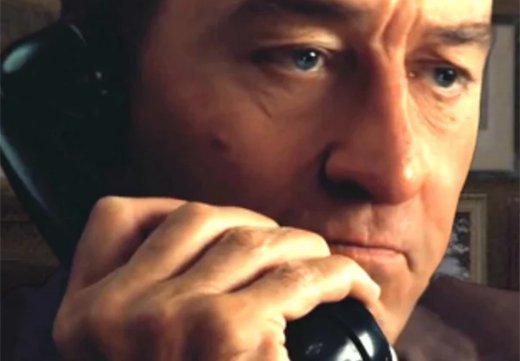 Robert De Niro, now 76, is "de-aged" in Martin Scorsese's mob epic, "The Irishman," which delves into the union and Jimmy Hoffa era
D

ebate has raged since early October over just what constitutes “cinema” in the first half of the 21st century. One of the trigger points has been the Todd Phillips smash hit “Joker,” an origin story about Batman’s nemesis that goes to great length in an effort to redefine the conventional approach to superhero myths. Another film that has generated robust debate is Martin Scorsese’s “The Irishman,” which would seem to suit the veteran Hollywood director’s status as a film superhero in his own right.

But the recent buzz around Scorsese hasn’t always been flattering.

In a recent interview with “Empire,” the 77-year-old Scorsese — the classics including “Taxi Driver,” “Goodfellas,” “The Departed” and “Silence” — set diplomacy aside in referring to superhero action movies (specifically the films that make up the Marvel Cinematic Universe) as “theme park rides.”

On the face of it, the remark doesn’t seem particularly incendiary. Scorsese is right in a way: any good popcorn movie has a lot in common with a thrilling rollercoaster ride, or should. But Scorsese’s ongoing insistence that these generally safe, PG-13 blockbusters didn’t qualify as “cinema” swiftly drew the ire of Marvel fans, as well as directors and actors associated with the massive franchise. 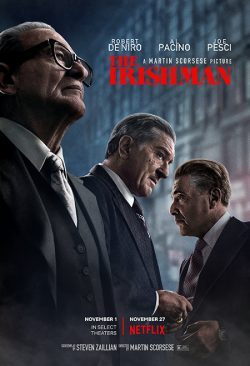 Scorsese goes down memory lane with his favorite actors and favorite theme, bad guys with their wits about them.

Some have slammed Scorsese for being out of touch. Taking a gentler approach, others have suggested what the aging auteur fails to understand (let alone appreciate) is that Marvel has literally redrawn the cinema landscape. By grouping together superheroes, expanding their numbers, and giving them fuller context, films about their exploits now exude a sense of the familiar, of commonality, and draw family and elite audiences alike. Viewers now recognize these heroes in ways that defy old stereotypes. Superhero movies now form the financial backbone of the new-age studio system.

But telling that to film historian Scorsese doesn’t get you very far.

The dispute has grown all the more complicated with the release of Scorsese’s latest feature, Mafia epic “The Irishman.” It reportedly took some $159 million to make (Scorsese’s most expensive film). When Hollywood balked, Scorsese enlisted Netflix, and the three-and-a-half hour marathon will appear on its streaming service beginning Nov. 27 after a limited month-long theatrical run.

This means the vast majority of those who see the film will do so on their televisions, laptops, or, heaven forbid, their smartphones. Netflix is also on the hotseat. Since the service began producing films of its own, filmmakers, Scorsese included, have criticized the company for its reluctance to give films proper theatrical exposure, focusing instead on streaming.

The death of mid-budget features has made Netflix into one of the few studios willing to take financial risks on ideas advanced by visionary filmmakers, old or young.

But that’s not all. “The Irishman” depends on all manner of digital trickery, including technology that allows actors in their seventies to reacquire youthful looks — the same trickery Marvel has turned to increasingly in recent years. The film’s lead actors, Robert De Niro, Al Pacino and Joe Pesci, are seen in action that spans five decades, beginning when the titular Irishman Frank Sheeran (De Niro) gets his start as a Mafia hitman in the 1950s. Sheeran will slowly work his way up to becoming a friend and acolyte of union leader and mob-associate Jimmy Hoffa (Pacino).

Admittedly, the first time you see the “de-aged” De Niro, the imaging does appear more than a little unseemly. It’s not that the effects are badly done in and of themselves. It’s just that the attempt to create a younger De Niro doesn’t particularly look like De Niro when he was young. The “Taxi Driver” De Niro of the early and mid-1970s was a slender, unpredictable livewire. Here, forty-something Frank Sheeran of the 1950s is a hulking figure with the unmistakably hunched posture of an older gentleman. 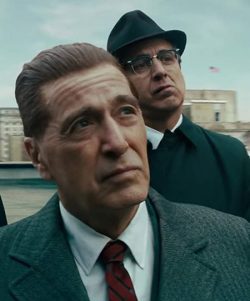 In fairness, this is a distraction that lasts only for a few minutes. Remarkably, the De Niro forced youth woes don’t seem to apply to Pacino or Pesci, both of whom appear to age remarkably gracefully. Both give arguably their best performances of this century. Whatever Scorsese’s position, the film wouldn’t have been possible in a less technologically gifted era. Make-up could not have possibly allowed these characters to remain credible over a half-century arc. Two decades is one thing, a lifetime another.

The traditional solution — the casting of younger actors in separate sections — would have diminished the cumulative empathy created by sticking to the original actors all the way through. Their facial expressions and body language are thus maintained.

“The Irishman” is a deeply introspective piece of filmmaking. It is fundamentally about looking back at what you’ve done and pondering if any of it was really worth while.

Bearing this in mind, and setting aside all the recent acrimony, it’s hard to believe anyone could see Scorsese as anything but a devoted movie-maker with strong, at times, emotional views. “The Irishman” is a homage to the craft he loves. He may not like certain aspects of 21st-century filmmaking but he’s neither dismissive nor intolerant. His story-telling methods, sturdy and slow, may not be those of a loud age, but that changes nothing.

Throughout his career, Scorsese has worked quietly but hard to ensure audiences like and care for his characters, and in “The Irishman” he does it yet again. His ability to evoke sympathy has never been more apparent.

Say what you will about his scoffing at superheroes, but Scorsese scoffs because he cares. It’s constructive criticism in an age in which critical remarks are often taken too personally, as if all criticism was intended as an affront.

Time and again, Scorsese has shown his open-mindedness toward technology. He’s shown a willingness to experiment and adjust himself to different kinds of viewing formats. “The Irishman” is another example.

However you choose to define “cinema,” Martin Scorsese is not its enemy.