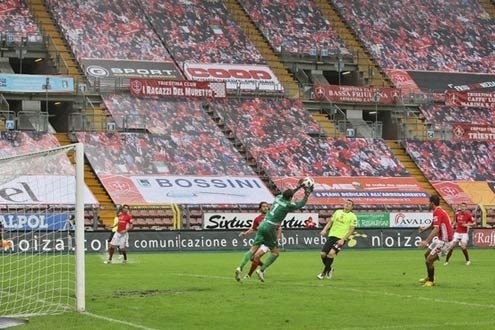 Two years ago, Triestina literally "painted in" fans to make an empty stadium more palatable.
I

talian football is in disarray. A summer dominated by widespread match-fixing allegations and the departures of star players are testament to its sorry state. Though this year’s miseries have certainly been dramatic, the sad truth is that Italian football has been declining steadily for a decade.

Corruption has blighted the game, beginning with the 2006 Calciopoli scandal, which led to the conviction of Juventus’ general manager Luciano Moggi and the Turin team’s subsequent relegation, and running through to last year’s match-fixing scandals, which saw Atalanta docked points and its former captain Christian Doni handed a lifetime-ban from the sport. This year, fresh accusations were leveled against Lazio captain Stefano Mauri. Even iconic goalkeeping legend Gianluigi Buffon was criticized for his non-football related betting habits.

The 19-year-old Verratti departs Italy after having just helped Pescara earn promotion to Serie A. The holding midfielder, who has drawn comparisons with Andrea Pirlo, was included in Cesare Prandelli’s preliminary 32-man list for the UEFA Euro 2012 and represents one of the nation’s most promising talents. His immediate transfer abroad comes as worrying news for Italy’s top division.

While the league’s financial limitations make the sales of Ibrahimovic and Thiago Silva a formality, Serie A should at the very least serve as a place where homegrown talent can be nurtured to eventually benefit the national team. Struggling Italy would do well to take a leaf from Germany’s top-tier Bundesliga. Clubs in Germany’s top league, with the exception of Bayern Munich, were in a similar position a decade or so ago, with their best players choosing to play in more luxurious foreign leagues.

The result was a three-pronged effort intended to develop the country’s youth, promote a more exciting style of play, and actively market both clubs and the league itself. The effort has been remarkably successful and led to Germany’s more precocious talent deciding to remain at home. Bayern has Thomas Mueller, Toni Kroos and Jerome Boateng, while Dortmund boasts Mats Hummels, Mario Goetze and Marco Reus. Their development has made for an exciting and increasingly accomplished German national side.

The fast-flowing football Germany puts on display before packed crowds in modern, safe, and aesthetically pleasing stadium is a far cry from the Italian experience, where empty seats predominate and the stands themselves are often dilapidated. In some venues, including Rome, fans have to peer beyond athletic tracks that surround the field of play. Hooliganism and occasionally brutal fan rivalries have produced sterner regulations on the admission of away supporters, further reducing already dwindling crowds.

If Italian clubs are to reap the ticket sale rewards, clubs, not cities and regions, must build and own stadiums. With the exception of Juventus, which is already seeing the benefits of its recent, state-of-the-art ground, football facilities are the property of city councils. This limits club gains from ticket sales, refreshments, advertising, and so on. Making matters worse, the prospect of multimillion-euro investment in new facilities, given the country’s ongoing financial woes, is fanciful at best.

But the greatest weakness in Italian football may be the way the game is played. All too often the pitch seems like a chessboard on which players tediously ponder their next move. Urgency is hard to find. The league suffers from a goals-per-game ratio that’s far lower than either the Bundesliga or England’s Premier League. Unsurprisingly, this has weakened television revenues, as the league struggles to sell itself outside its borders. Meanwhile, seemingly incessant match-fixing incidents have further disillusioned fans. As the country tries to make ends meet, selfish, greedy players are hardly standard-bearers.

Even some players appear to have grown bored of the defensive style of play. This month, Fabio Borini swapped Roma for Liverpool, saying he felt more comfortable with the faster-paced game he once played in England. Borini’s departure was yet another blow to the image of the Italian game, since the 21-year-old had impressed in his debut season at AS Roma, scoring nine goals.

Unless Serie A begins righting these wrongs, it risks a further drop in European prestige. A first move might be to use the youth injection to usher in a new dawn, with greater emphasis on the grooming and development of promising players. But to achieve that objective, the game must still confront deeper problems, namely corruption, antiquated stadiums, and dreary tactics. Otherwise Italy risks falling out of love with the beautiful game forever.